The phrase “everyone’s a critic” has never been more accurate than it is today. It’s easier than ever to share your opinions with the rest of the world. Through the use of blogs, statuses, tweets and videos, the Internet has spawned a new age of amateur criticism that anyone can join. In a lot of ways, it’s an amazing and wonderful thing. However, a growing downside is becoming apparent.

If you’ve ever spent more than 30 seconds reading the comments on any given YouTube video, you know just how cynical a place the Internet can be. At some point, most of us decided that complaining is cool and negativity became the norm. In the past few years it seems that this same relentlessly pessimistic attitude has been refined and aimed at one medium in particular: movies.

Most film-related blogs, statuses and videos that I stumble upon are dedicated to tearing “bad” movies apart. They go out of their way to identify every minor flaw in a given movie and bring it to your attention. Perhaps the best example of this trend is the YouTube channel “CinemaSins.” If you’re not familiar with CinemaSins, the channel produces a series of videos dedicated to finding everything wrong with a certain movie and rendering a judgement on that movie based on its “sins.” They’ve gained a large following, and they don’t seem to be a passing fad; at the time of the writing of this article, the CinemaSins channel had garnered over 350 million views. The channel has also spawned a number of imitators and blatant rip-offs, all with the same goal: to find everything wrong with a movie.

Just what is it that makes this format so popular? I suspect it’s a combination of a few factors. For one, this type of criticism and humor has a very low barrier of entry. After all, it’s not hard to sit down and list everything you don’t like about a movie. I think another big draw is that the audience for these videos gets to feel a certain sense of superiority when they’re watching somebody else’s work get torn to shreds. It’s awfully nice to have your opinion validated by someone who hates something just as much as you do.

Finally, some of these reviewers are genuinely funny, and have come up with really clever and creative ways to criticize bad movies. Taken as humor, these videos and blogs are relatively harmless and can be quite fun for the right audience.

The problem occurs when we watch these videos, read these blogs and take them as legitimate criticism; it changes the way we watch movies. We go into movies looking to point out flaws and identify all of their problems. Instead of considering what a film is trying to tell us, we spend our time thinking about a plot hole here or a misread line there. This type of thinking can easily rob you of the joy of watching a perfectly decent movie. Even worse, it can cause a sort of cinematic tunnel vision; you can see a movie’s flaws crystal clear, but its virtues are a blur.

Movies can be incredible, wonderful things if you let them. They can quite literally change your life if you go in with an open mind. For example, the movie “Amour” can help you come to terms with your mortality. “The Tree of Life” can put the process of human grief and suffering into perspective, set against the backdrop of eternity in our vast universe and beyond. “The Princess Bride” can help you properly define the word “inconceivable.” Every decent movie has something waiting for you if you’re willing to look hard enough for it.

Making a movie is incredibly hard, and making a good one is harder still. To define a movie as the sum of its flaws is a disservice to yourself and everyone who made that movie. The desire to think critically about films is a great first step, but I would encourage people to take a slightly different approach than these reviewers. Go into movies with an open mind, and try to consider them as a whole instead of a collection of individual moments. Simply ask yourself two questions: what is this movie trying to do, and how well is it doing that? Who knows, you might come to some interesting conclusions.

Connor Kelley is a junior in accounting. Please send comments to opinion@kstatecollegian.com. 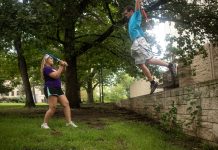