A common misconception about bicycle police officers is that they are undergoing some form of punishment. However, Riley County Police Department bike officers insists this is not the case.

“Where some people think it’s a punishment, it’s (actually) a commitment that everyone on the team wanted and asked for and has to work to keep,” said officer Matthew Droge, public information officer for the RCPD and one of the bike instructors in the department. “It is definitely a dedicated group of officers that’s for sure.”

Becoming a bike officer is not an easy task, Droge said. First, one of the 10 team positions has to open up. Officers applying for the “bike team” have to be employed with RCPD for two and a half years prior, to make sure they understand how the department works and the community’s expectations.

“After you apply, if you get selected for the team, you go basically to bike school,” Droge said. “It’s a week long, 32 hours, plus the (shooting) range. There’s a classroom, there’s a written test and there’s a skills tests. If you pass all that, you get your bike uniform and you’re a bike cop.”

Officer Mike Dunn patrols on bike, as well as instructs other officers on the team. Dunn said he has been a bike officer for approximately four years; two and a half as a member of the Emporia Police Department, and one and a half years with RCPD.

Dunn said there are two bike officers per shift who usually stay near Aggieville and residential areas. Dunn said he and his partner, officer Chris Comes, patrol the area on bike during their eight-hour shifts.

“We will ride around the areas kind of around the Aggieville area and the residential areas around the park, specifically working on traffic,” Dunn said. “Then, in the evening hours when it gets darker, we’ll start to focus on alcohol violations and stuff like that.”

Comes said they can do nearly everything on bike that a police unit in a car can do, with the added element of being more exposed to the elements.

“In a car, you can’t hear everything because you have the motor and the air conditioning and that kind of stuff blaring,” Comes said. “You can’t smell everything, because you only have a small window next to you. We get more exposure and people are more apt to talk to bike officers; we are more approachable than a cop car typically.”

Dunn and Comes said people often ask them questions such as if they have ever shot anyone and what they do if a car runs from them.

“Of course we’re not (go) after someone on a highway going 45 mph,” Comes said. “That’s why we like to stay closer to a residential area, so it’s easier for us.”

Dunn said RCPD bike cops are strategic about the areas where they conduct traffic stops.

“Typically, we’ll set ourselves up at either a stop sign or a traffic light so that we can look and see traffic infractions out in front of us,” Dunn said. “Then, they’ll have to stop at either that traffic light or that traffic stop. While they’re stopped, that will give us a chance to ride up next to their window and grab their attention.”

Aaron Apel, co-owner of Big Poppi, said RCPD is tough on their bikes because of duty to keep Manhattan safe.

“They tear the crap out of the bikes,” Apel said. “I mean, part of it is the nature of the work they are doing. They don’t just ride on pavement; they ride on every terrain you could possibly think of and some terrains that you wouldn’t traditionally think to ride on. They have one goal in mind, and that’s to keep the public safe.”

Apel said damages to the bikes are caused by regular police duties and by training, which involves simulating lifelike scenarios.

“Bikes get beat up when they’re doing their training stuff too, because they like to take them down stairs and stuff like that (to simulate) rougher terrain,” Apel said.

Opting to be on the bike team does have its disadvantages as well. In the winter, for instance, the officers continue their bike patrol. According to Dunn, the bikes can be utilized safely in approximately 4 inches of snow, but not in ice. Officers to have the ability to switch to a police car instead if it gets too cold for comfort or safety.

“For me personally, it’s when the wind blows really hard,” Dunn said. “It can be 5 degrees out and I’m okay with it if there’s no wind. On the flip side, it can be 25 (degrees) and if the wind is blowing out of the north at 20 mph, it’s going to be too much. It just goes right through you.”

Despite the unique challenges bike cops face, Dunn said bike cops like to be out on patrol whenever they can. 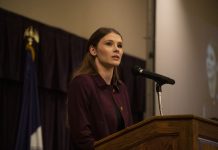