The sound of a volleyball ricochets off the aged-wood bleachers in historic Ahearn Field House. The field house falls silent as sophomore Katie Brand retrieves the dead ball and sets up once again.

In her mind, it’s match point of the final set; the empty bleachers are filled with screaming fans, making Ahearn deafening. Though her coaches and teammates retreat toward the locker room, in her mind they’re with her on the court, anxiously awaiting her serve.

When talking to people about Brand, it’s nearly impossible to avoid talk of the redshirt sophomore’s work ethic.

“Brand sets a standard for work that is unparalleled – and we have a lot of really hard workers on this team,” K-State volleyball head coach Suzie Fritz said. “She’s the player who shows up about an hour early for practice, and she will stay about an hour late.”

It’s that work ethic that led her to be named to the All-Big 12 freshman team after a stellar freshman campaign that saw her, among other things, lead conference setters in kills, blocks and points.

It’s that effort that led her to become the second K-State sophomore to be named to the All-Big 12 preseason watch list team.

Brand hails from Grand Island, Nebraska where she was a four-year varsity player for Central Catholic High School.

She was a part of a state championship team her junior year and is all over her high school’s record books, ranking in the top 10 in kills, digs, blocks and assists. She also owns the record for kills in one match with 28.

“I’ve always said that Katie has a motor, a motor that just won’t quit,” Zavala said. “She could play a full basketball game and then still practice volleyball afterwards. She has a desire to play and play so hard that it inspires.”

It’s that energy and drive that serves as a building block for Brand’s leadership.

“I feel like I had to step up a lot this year, especially vocally,” Brand said. “I’ve always believed in leading by example, and I think that is still a concept that will stick with me. However, this year I have to be more vocal as well.”

While the coaches and players have seen her start to really take ownership of her leadership position, they’ve also noticed Brand’s improvement across the board.

“She’s more consistent,” senior outside hitter Chelsea Keating said. “Last year was her freshman year, so going into the Big 12 she was kind of shaky and it was a new experience. Just having a year under her belt will be great.”

Not one to be content with playing it safe, Brand describes herself as a risk taker on the court, much to her coaches’ chagrin.

“I like to make the difficult set,” Brand said. “That’s not always what my coaches want. It’s easier to set forward, but I like to run as far forwards as I can and jack the ball backwards.”

As for her volleyball dreams after college, it’s up in the air. But, if you listen to her high school coach, you’d think the stars are the limit.

“She will go as far as she wants to go,” Zavala said. “You know, if she says she’s going to make it to the Olympics, I don’t doubt it.”

With three full years left to play, Brand still has plenty of time to figure out the future. Right now, all she can do is visualize it. 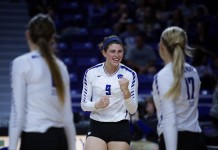 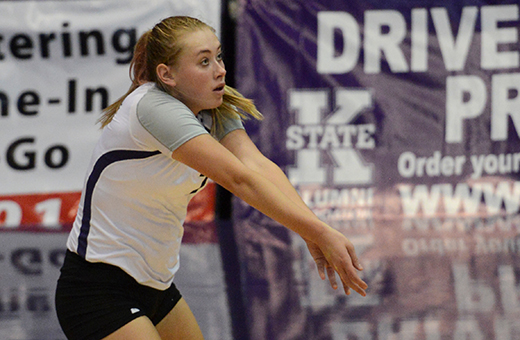 Jackrabbits next for Zumach, K-State volleyball