With less than 50 career yards returning in the K-State backfield, uncertainty filled the minds of 50,000 purple clad fans on Saturday night

But in atypical Bill Snyder fashion, four running backs combined with a trio of quarterbacks to rush for 265 yards on a combined 51 carries and four touchdowns, while leading K-State (1-0, 0-0) to a season-opening 55-16 win over Stephen F. Austin (0-1, 0-0).

The Wildcats rode their backfield to an impressive 37:44 of time of possession, while tiring the Lumberjacks defense with its ground-and-pound attack.

“That’s what we were talking about all camp, that we needed to start out fast and couldn’t afford to let [the Lumberjacks] hang around,” senior quarterback Jake Waters said. “To go out there and get the first score and the next score, it really showed us what we can do when we execute.”

The Wildcats’ offense was propelled by a solid early performance by their senior running back DeMarcus Robinson.

To add to his impressive start, Robinson also added four receptions for 47 yards in the opening half to lead the team in receiving out of the backfield.

“It’s the first game so we’re going to go back and see the things that we could’ve done better,” Waters said. “I think they ran hard, they caught the ball out of the backfield, the couple of check-downs that I threw to Charles and DeMarcus, they made [people] miss and got the first down.”

In his first game action, sophomore running back Charles Jones added 55 yards on eights attempts, finding the end zone twice for the Wildcats. His hard-nosed effort garnered a lot of praise from the coaching staff and players after the game.

“I loved the fact that he ran as hard as he did, I mean he was an aggressive runner,” Snyder said. “Charles made some of those second effort plays, he made a number of those and I was pleased about that.”

Jones lined up in the Wildcat on both of his scores, filling the shoes that were previously held by former quarterback Daniel Sams.

Waters cooled off in the second half, finishing with 55 rushing yards and 223 total passing yards.

K-State’s ability to control the ball aided its first-quarter push and 28-10 halftime lead. They controlled the ball well over half of the first quarter and 20 minutes of the first half.

Minden sparked a seven-play, 60 yard drive and scored Stephen F. Austin’s first touchdown of the night with a 18-yard scamper in the second quarter.

The Lumberjacks brief second-quarter resurgence was aided by their quarterbacks’ ability to escape pressure.

“it’s not rocket science to be able to stop the quarterback when he pulls it down and brings it out,” Snyder said. “They did a nice job of scrambling with the football and we did a miserable job of defending against the scramble. We’re not a very good pass rush team.”

The back seven of the K-State defense struggled against the Lumberjack rushing attack when it found open field, but made up for its mental gaffes with strong pass coverage over the middle.

“The [quarterback run game] is something we definitely got to work on for the future,” senior linebacker Jonathan Truman said. “We knew that the quarterback run game was something they may do, but in terms of the drop back pass and scrambles, we really need to focus on that for future weeks.” 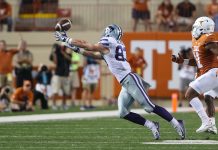 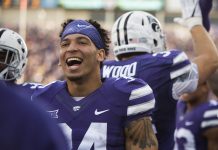 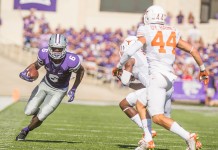