Conflict between roommates is normal, but that doesn’t mean it’s not stressful. While tension between the roommates has the potential to derail relationships, with a few easy steps you can ease the tension and have more pleasant living experience.

“We have almost 4,000 students living in the residence halls,” Lander said. “And the overwhelming majority do not have serious roommate issues. Often the conflict has to do with differences in lifestyle, cleanliness or studying habits.”

Here are a few things you can do to prevent conflicts with roommates from disrupting your life:

According to Lander, being open and honest with roommates can save a lot of grief later on.

“With clear expectations from each other and good communication, the issues can be avoided or dealt with more easily,” Lander said.

“I had a roommate who wanted to keep drugs in our dorm room,” Konda said. “When he told me about it, I told him that I was not comfortable with that. Luckily, he respected my opinion and didn’t bring any into the room.”

Konda is now renting a house from relatives and living with three other people.

“We have only lived with each other for about two weeks, so we haven’t had any problems yet,” Konda said. “But we all agree that if someone has a problem with someone else, they just need to be upfront and tell them.”

Loryn Wiebe, sophomore in secondary education, lives in the Alpha Chi Omega sorority house, where they have a similar policy of toleration and open communication.

Wiebe lives in a four-person room. In Alpha Chi, this means her and her roommates keep their belongings and spend the majority of their time in an alcove or study room of sorts. However, Wiebe sleeps in one of three sleeping dorms that can accommodate up to 20 women.

“I haven’t grown accustomed to sleeping in a room with so many other people, but I know it will get easier,” Wiebe said. “The older girls have all said that they had problems at first, but they quickly grew to tolerate and even sleep too much in the sleeping dorms.”

Lander said that dealing with conflict is a part of life, and that he sees helping students address roommate problems as an opportunity to help them learn how to handle disagreements.

“We have trained staff to help,” Lander said. “You
won’t get that off-campus, and you won’t have that structure when you have
conflicts in the future with friends, coworkers, significant others or neighbors.
So, rather than avoiding dealing with conflicts, students should take advantage
of the help they have now to learn how to communicate and work through
conflicts.”

How to be a decent roommate 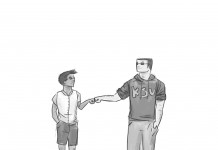 How to be a decent roommate