Against Iowa State, the Wildcat offense was very inconsistent. During a stretch of 18 minutes in which the Cyclones scored 28 unanswered points, the Wildcat offense looked completely disheveled. The Wildcats had two straight three-and-outs following the Cyclone’s 82-yard punt return touchdown by the fifth-year senior Jarvis West. Simply put, the offense had very little sustained momentum against a confident Cyclones team.

The offense also had issues with penalties, having a handful of false starts during the Cyclones run that forced the Wildcats into long-yard conversions.

The offense was put on the back of quarterback Jake Waters, who’s rushing saved the game. The senior finished with a career-high 138 rushing yards and two touchdowns on his 20 rushing attempts.

His quick thinking and quick feet allowed the offense to build enough momentum to overcome the upset-minded Cyclones.

“He’s a tremendous competitor, obviously a smart football player, knows the system well and orchestrated it very well,” Rhoads said after the game. “About 80% of your team’s responsibility is not to get you beat, to do their jobs. The other 20% [of players] are guys capable of winning the game, and Jake Waters is one of those guys.”

Also a a bright spot for the Wildcats’ offense was senior wide receiver Tyler Lockett. While not having a touchdown reception, Lockett made several plays down the stretch to put the Wildcats in a position to win. Lockett finished the afternoon with six receptions for 136 yards, his record-tying 10th 100-yard receiving game.

Despite receiving a low grade, the defense was good if not great in the second half and statistics proved their play. They limited the Cyclones’ offense to only 105 rushing yards on 37 attempts, while holding the Cyclones to 4 for 13 on third-down conversions.

The forgettable parts came through the final 10 minutes of the first quarter and most of the second. They allowed three straight scores to the Cyclone offense, while also giving up 121 passing yards. They saw the deficit quickly grow to 28-13.

The special teams had a very disastrous play when it allowed wide receiver and return specialist Jarvis West to put on the afterburners and torch the coverage team for a 82-yard touchdown return. In a game that was as close as this one was, this type of mistake could have led to the Wildcats losing.

Special teams is something that Snyder regularly preaches to his team and this will need to be corrected in a hurry.

Stat of the Game:

West accounted for three Iowa State touchdowns on the day; a touchdown pass, a receiving touchdown, and a punt return for a touchdown.

West is only the third person to accomplish this in FBS or FCS history. The senior was the first to do it since Randall Cobb in the Kentucky vs. Western Kentucky game on Sept. 11, 2010.

The touchdown pass was West’s first pass attempt of his career. To add to his day, West’s eight receptions were a career high. 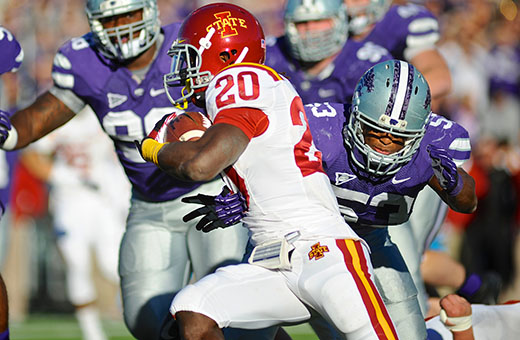