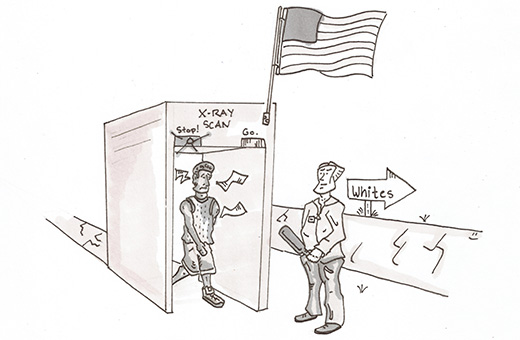 The word “privilege” on its own is a loaded term in our culture, and the discussion of whether it exists in the context of race is one currently filled with social turmoil. Although the existence of white privilege is commonly denied by those who are white, its prevalence is easily confirmed by the people who continue to experience it on a daily basis.

Long after the Civil Rights Act of 1964 that abolished segregation, harmful stereotypes about people of color continue to exist in our country. The difference is that now, they’re much more discreet. The term “white privilege” is used to describe the societal advantages members of the white community enjoy at the expense of non-white individuals, whether it is intentional or not.

In 1988, anti-racism activist Peggy McIntosh published an essay titled, “White Privilege: Unpacking the Invisible Knapsack.” McIntosh’s publication detailed a list of 50 commonly overlooked examples of white privilege she felt she benefited from on a daily basis as a white woman. Entries include everything from seemingly innocent observations, such as being able to purchase bandages in colors such as “flesh” or “nude” and have them more or less match her Caucasian skin, to more overtly detrimental cases like not needing to educate her children on the effects of systemic racism for their physical safety. These same small advantages still apply to white people today.

White privilege has become even more of a hot-button issue following the shooting of Michael Brown in Ferguson, Missouri. The chaos surrounding the incident has made dismissing it as an unrelatable concept even easier, because we believe it doesn’t personally affect us. I, too, struggled to see how I fit into the white-privilege equation until last year when I had an eye-opening experience of my own.

Two summers ago, I went on a shopping trip with a friend, “Sheena,” to Sephora in Kansas City for some new cosmetics. After Sheena (a young, biracial woman) and I spent a couple of hours perusing the store and testing the merchandise, we each decided to purchase a new makeup bag.

I checked out as usual and stood back to wait for Sheena. After taking a look in Sheena’s basket, the cashier picked up her makeup bag and proceeded to unzip and search through every compartment inside the case. Upon noticing our confusion, the cashier quickly said, “Oh, I just wanted to make sure I got all of the tissue paper out of here for you,” and handed Sheena her new bag.

At the most basic level, this was just one of many instances of systemic racism Sheena has endured throughout her life as a woman of color. For me, however, it was the first time I had truly encountered an event where my privilege as a white person was so blatantly put on display. When I walked into Sephora, I was seen as a patron interested in purchasing items from the store. When Sheena walked in, she was seen as a potential threat and someone who needed to be watched. Even though she and I spent the same amount of time in the store and bought similar items, I got to leave the way I entered. Sheena didn’t get to leave without being searched and forced to confirm that she was acting appropriately.

Since then, I’ve noticed white privilege everywhere; whether it be in subtle instances such as not having to worry about being followed by security in the mall, or more obvious ones, like hearing stories of African American coworkers who were publicly searched and accused of stealing for simply using the wrong gate at work. However, with the understanding that white privilege is alive and well has come an internal struggle with knowing that the privilege I experience on a daily basis is at the expense of others, even if I don’t choose to receive it.

As with many social issues, acknowledging the existence of white privilege and increasing awareness of the problem is the first step to making positive change. Although members of the white community cannot necessarily “give back” our privilege, we are responsible for understanding how it affects others so we can begin creating a future in which it does not exist.

Kaitlyn Dewell is a senior in mass communications. Please send comments to opinion@kstatecollegian.com.

OPINION: Discrimination does not end with a press release