When African-American students travel to Manhattan, they have to come prepared as far as hair and skin care products go. Some K-State students find it difficult when it comes to finding quality hair stylists or barbers and products that specialize in black hair.

Tyrone Williams, senior in arts and sciences, said he believes the available selection of black hair care products and barbers is limited.

“We have a small selection out here, unlike in a bigger city where it’s predominately black (populated),” Williams said. “Here, it is predominately white, so you can’t really get what you need.”

Williams said he only knows of one good barber that he trusts with his hair, but he’s located in Ogden. As such, Williams spaces out his haircuts for when he really needs it. Williams said many of his female friends have similar issues, and drive to other cities just to get their hair done.

Latitia Pendergrass, freshman in life sciences, said she prefers to get her hair done in her hometown of St. Louis before coming to Manhattan.

“I really don’t have a problem finding anyone to do my hair here, because I just get it done when I’m at home,” Pendergrass said.

“More so, businesses should really want the black population to come,” Adams said. “I mean, we’ll come as long as you can provide the service that we’re looking for. It’s nothing for them to do research.”

Adams said if big stores don’t start including more products catered to the needs of African-Americans, they will no longer have a reason to take their business there.

“There are certain products that are better for our hair and for our skin,” said Kimetris Baltrip, assistant professor in journalism and mass communications. “Not everybody needs the same kind of health care and beauty products.”

Though Baltrip said she can find many products she needs online, the downside is that not everyone has the credit or access to a computer. Which is why local businesses need to sell products that represent the needs of the African-American community.

Baltrip advised African-American students to try investing in natural products like coconut oil and castor oil, which can be found anywhere and have various uses.

“Overall, I think we need to know thyself and do what you need to address your own personal needs,” Baltrip said.

According to Baltrip, it’s not unusual to have a limited selection of African-American beauty products and salon owners in small communities. However, in order to expand the selection of black-owned salons and beauty supply stores, there needs to be support from the community. Data from the 2013 U.S. Census indicates that of the approximately 56,143 residents in Manhattan, 5.5 percent identified themselves as African-American compared to the 83.5 percent Caucasian population.

Lindelani Ndou, owner of Linde’s International Beauty Supply and African Braiding Salon at 114 S. Fourth St., opened her Manhattan salon in 2010 after her husband enrolled in classes at K-State.

“I’ve been doing hair in my country since I was 12-years-old,” Ndou said.

Ndou said she decided to open her business here because she wanted to turn her hair-braiding hobby into a business in a town where the demand was high.

“Coming here to the United States, I’ve realized how much this type of business is needed,” Ndou said. “We have a lot of people that can use this type of service, like military and students.”

After she noticed her client’s shopping inconveniences, Ndou said she decided to open her beauty supply store next door to her salon.

“After two years of doing the salon, I realized I needed to open the store because nobody had this store in Manhattan,” Ndou said. “People had to go to Junction City and some of these people are students who didn’t even have rides to go there.”

The start-up process of Ndou’s salon was much different than barbershop owner Shannon Lewis of Debonaire’s Haircuts, located at 3003 Anderson Ave. Lewis started cutting hair professionally four years ago, and said he decided to open up Debonaire’s in 2013 because he felt Manhattan was in need of an “old school barbershop.”

Lewis said aside from just Manhattan, there is a bigger need for black barbers in the state of Kansas in general.

A beginner’s guide to makeup 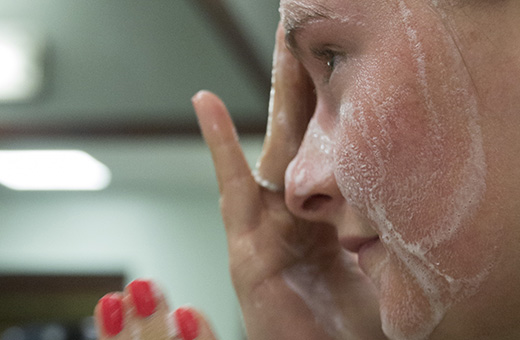 Effective skincare is a mix of home remedies and investing in...