Though they hail from different states, seniors Madison Wayda and Savannah Smith share two important commonalities: they’re both captains on the 2014-15 K-State equestrian team, and their love for their sport was established long before they became Wildcats.

Wayda participates in equitation over fences under the Hunter Seat division, while Smith competes in the Reining division of Western competition.

Wayda, from Newbury Park, California, has spent her entire life around the equine industry. Wayda said that both of her parents ride horses, which established her interest early.

“My dad used to play polo, and my mom has done pretty much everything you can think of,” Wayda said. “They were always super supportive of me going out and competing and trying different equestrian sports. They really just pushed me along the entire time.”

Wayda said that for a while she was mainly interested in vaulting, but decided on jumping (equitation over fences) instead. Throughout her youth, Wayda participated in competitive show jumping.

“It was a great experience,” Wayda said. “I traveled all over the place – from Canada to Florida, even to Puerto Rico (for competition).”

Will Simpson, Wayda’s former equestrian coach and 2008 Olympic gold medalist, said that they met at shows and he had seen her ride.

“She started coming over, helping us out with riding while we were gone and we gave her lessons,” Simpson said. “She’s very organized and has very good fundamentals; very good form equitation. The other thing that sets her apart is she doesn’t get rattled, she’s very cool under pressure.”

Simpson, who coached Wayda for about 2-3 years, said that Wayda has won several awards in the junior jumpers.

Wayda explained that her decision to come to K-State was rooted in her initial visit with the combination of the team and campus.

“When I came here for my visit, all the girls were very welcoming and super friendly,” Wayda said. “I really noticed that the team was very close on both sides, English and Western, and that they just had a very strong team.”

This is Wayda’s second season as a team captain, and she said she feels like she has stepped up more this year and had more of a voice in team matters.

Smith, from Chinook, Montana, competes on the Western side of the equestrian team and also has a strong equestrian background.

Both of Smith’s parents rode Arabians in their early years of showing and competition. Her mother used to participate in endurance rides.

“My mom used to participate in endurance rides, which are 100 miles long,” Smith said.

Jay Smith, Savannah’s father and former coach, said she’s very easy to coach and that each time she got into the arena, she did everything exactly as she had been coached to do.

“She learned a lot watching other people ride and warmup their horses,” Jay said. “Her biggest quality that she showed was that she never got nervous and she always rode with a nice slow hand and a soft feel. It seemed to relax the horses when she rode them that way.”

Smith said her initial visit to K-State made her feel like this was where she meant to be; she fell in love with the atmosphere and the people.

“I really liked being on campus and everyone was so friendly,” Smith said.

K-State head coach Casie Maxwell explained that both team captains were really successful prior to coming to Manhattan.

“They had a lot of really great opportunities to ride some different horses and came to us well-trained,” Maxwell said. “They’re great teammates; they’re great leaders on the team.”

Maxwell said though plenty of improvement can occur for her two seniors, she believes they’ll get it done.

“They’re experienced,” Maxwell said. “They’re veterans in this and they know how it works. They know how to adjust and so I expect that we’ll be able to look to them to stay mentally calm and keep things together and lead their other teammates in the right direction.” 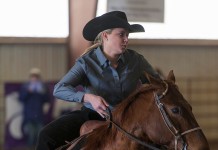