Though we’re only three weeks into the semester, students are already beginning to search for ways to unwind. Some decide to workout, others choose to sleep and others visit Aggieville.

On a typical weekend, it seems to be barely contained chaos in Aggieville. People are everywhere; they’re catching up with friends while letting their homework pile up to Sunday because they just need a strong – yet cheap – drink.

Bartenders prove to be valuable resources for students, as they have great taste when it comes to drinks they think their patrons will enjoy. Here’s a few recommendations from bartenders around Aggieville:

Mojo’s Beach Bar, located on eastern edge of Aggieville, offers its patrons several deals in the form of a membership to the “Yacht Club.” The club gives special pricing on shots, certain beers and drinks for just $40 annually.

Paul Danler, co-owner of Mojo’s, said most people like their colorfully-named tropical drinks, such as the Bananarama and the Sharknado, which consists of a shot out of a plastic shark. Danler said his favorite drink to make and consume off the large chalkboard menu is the Cantaloupe Bay, which is V8 and Grey Goose Le Melon Vodka, though he said personally prefers to drink gin.

On the opposite side of Aggieville, Eighteen63’s Taylor McKinley, senior in marketing, said she prefers Firefly Sweet Tea Vodka and water when she’s drinking.

However, Eighteen63 is known for its flaming LAX Bombs. Eighteen63 uses its own secret mix.

Michael Mezzacappa, senior in social sciences and bartender at Tubby’s, said all he needs to have a good time when he goes out is a good Bud Light. Despite his choice in drink, Mezzacappa said he recommends more aggressive drinks for his customers.

“AMFs and Tornados are our signature drinks,” Mezzacappa said.

AMFs are made with a myriad of alcohol, including vodka, rum, tequila and Blue Curacao liqueur. The Curacao is what gives the AMF its bright blue color.

“Any bright colored drink seems to be a hit with customers,” Mezzacappa said. “But if someone wants something fun, let’s get some tequila shots going.”

Kite’s Bar and Grill is known for its $2.50 pounders, according to bartender and Manhattan resident Andrew Nusall. The pounders, which are the 16 oz beer cans Kite’s offers, are Bud Light and Shock Top products. Nusall said he prefers Long Island Ice Teas when he goes out. Just like when college students visit Tubby’s, AMFs are popular at Kite’s also. There is no recognizable difference between the drinks at both bars.

“When I was in college, I just always got what was on special because it was cheaper,” Lacy Struckmeyer, manager of Aggie Station, said. “But now that I’m older, I just get whatever I want,”

If you are going to Aggie Station, Struckmeyer recommends the Moscow Mule which contains top shelf vodka, lime juice and ginger beer.

She also shared that her bartenders are really original and tend to recommend their favorites.

“People to make the things they like better when people ask them about their favorites,” Struckmeyer said.

These are just a few of the bars in Aggieville, but already the point has been proven that Aggieville bartenders are the people to talk to if you want to unwind from the stresses of being a college student. So go visit your favorite bar and ask your bartender what they recommend and see where the night goes from there. 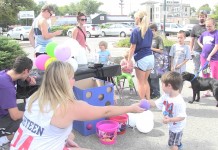