Men and women alike are waving goodbye to the idea of traditional courtship as a new revolution of technology takes over the dating scene. The realm of human interaction continues to diminish as apps, games and texting replaces conversations and eye contact.

As much as some of us like to think chivalry is not dead, it’s most certainly not alive. It’s being replaced with a thriving, living and successful app known as Tinder.

For those of you not familiar with Tinder, here’s a short breakdown: upon opening the app, users are greeted by a picture of themselves surrounded by a radiating GPS system that is programmed to find “single” men and women near the user’s location. The app connects with Facebook profiles in order to find pictures and ages of the people online; pictures which then can be viewed by anyone in the allotted radius.

The radius users want to be covered can be changed with the click of an icon, and photos of possible suitors can be slid left for no and right for yes. Tinder uses a mutal-selection paring process, so if both users swipe right on each other, they’re matched.

Tinder is essentially a new dating platform in the form of a free app. However, unlike dating websites where there are more outlets to get to know a person – like information and more importantly, background checks – Tinder offers nothing but a location, name, age and (if you’re lucky) a decent picture.

Capt. Donald Stubbings of the K-State Police Department said that with a matchmaking app such as Tinder, there is less room for communication before any sort of meeting is planned.

“With Tinder, I think there’s not as long of a term of dialogue with the person, because it’s based on your location and based on your profile and things like that,” Stubbings said. “There’s less dialogue and more of a meet-now platform and when you do that there’s always less interaction, so you get to know the person less than you would on maybe a traditional site.”

Stubbings said alternative dating platforms are very popular, whether it’s Tinder or an online dating site. Though Tinder may seem more dangerous than an online dating website because less information is given, people should still be careful when using either.

“We need to use caution when using any app or any online service since you’re not meeting that person in-person,” Stubbings said. “But just use caution just like anytime you’re on a date.”

For those relentless and adventurous in the dating world, it might be safer to turn a date into a double date.

“If you do meet with somebody, take somebody with you so you always have that person there in case it’s someone that you’re not comfortable with,” Stubbings said.

Tara Singhal, a human services counselor for the state of Kansas, received her master’s degree from the University of Kansas in mental health counseling. Singhal said she thinks the success of the app and its ability to matchmake depends on the users, and not the platform in which these users date.

“I think it depends on the people and it’s not necessarily the method they use,” Singhal said.

“You could just meet at a bar and that’s meeting face-to-face without any of the preliminary stuff, and it could go totally wrong or never turn into anything,” Singhal said.

Although there are risks to meeting up with complete strangers found on a cellphone, Singhal said these same risks present themselves when going out on a Friday night. However, she said she would still be cautious when meeting someone for the first time.

“If I were going to meet someone I didn’t know using the app I would say like ‘Hey, you want to meet up at a public place for like coffee or a drink or something,’ or I’d be like, ‘Hey let’s bring a friend,’” Singhal said. “You can have a safe way of meeting someone.”

Haley Lynn, senior in social welfare at the University of Kansas, used Tinder as a joke when she first got the app.

“My friend told me I should get it because it can be absolutely hilarious to talk to random, and often very weird strangers,” Lynn said.

Only four days after she got the app, however, she was paired with a mutual friend of hers and decided to meet up with him. She said it wasn’t awkward at all.

“The situation is obviously a little weird, but once I was with him for awhile I felt completely comfortable,” Lynn said. “It can be awkward because you specifically liked a person’s Tinder profile because of how they looked.”

Lynn made the initial decision to meet up with someone she had met on Tinder because she was feeling spontaneous, and she said she thought she would regret it if she didn’t. She said she would not have met up with the Tinder match if there hadn’t been a mutual friend.

It is obvious that safety comes first when matching up with singles on the Tinder app. However, that doesn’t mean that searching for relationships via new technology can’t be successful.

“Trust your gut, and if you feel like it’s safe, do it.” Lynn said. “You never know what could come from it.” 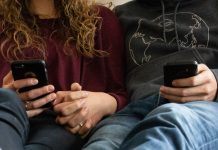 OPINION: Dating culture among college students has become too casual, unrealistic with presence of social media

OPINION: Finding a significant other in the digital age