The new K-State Welcome Center will be named the Berney Family Welcome Center, according to a K-State press release after the Kansas Board of Regents approved the decision Wednesday.

Construction is scheduled to start on the center in 2015, which will be built on the east side of K-state’s Memorial Stadium.

The name was chosen in recognition of an $11 million “commitment to advance the university” made by Rand and Patti Berney of McKinney, Texas. Rand Berney graduated from K-State in 1977 with a bachelor’s degree in accounting, while Patti Berney attended Fort Hays State University.

It all started when Derek Meek, 54 of Topeka, failed to appear in Jackson County court, according to the Topeka Capital Journal. A Silver Lake police officer tried to make contact with Meek after he stole a parked Jeep Grand Cherokee.

The chase started east on US-24 at 1:35 p.m. and at one point Meek left Shawnee County and entered Jefferson County. By the time the car broke down at the 2900 block of N.E. Meriden Road, three of the four tires were down to the rim.

Meek was then taken into custody with no incident and was charged with theft of a motor vehicle, fleeing and eluding police, numerous traffic violations and the charges of not appearing in court.

Nextel Communications was acquired by Sprint in 2005, making the Sprint Nextel Corp. Nextel was a leader in push-to-talk technology. As part of the sale, Sprint received $10 million of the purchase price in Pacific DataVision common stock.

The woman, Alice Thomas, was injured at about 1:30 p.m., according to the Topeka Capital Journal.

The vehicle, a 2003 Ford Taurus, was traveling north on K-13 when it left the roadway, struck a field entrance, rolled and landed upside down. Thomas was pulled from her car by rescue crews and taken to a nearby hospital. 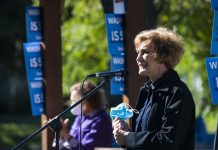