If you happen to run into Charles Jones around campus, chances are he’ll have a big smile on his face.

Simply put, the sophomore running back out of Mandeville, Louisiana loves football. He rushed for 1,767 yards and 22 touchdowns in his final high school season. That same year, the Louisiana Sports Writers Association named him honorable mention all-state. Jones was a passionate, go-to starter for three years.

When he arrived at K-State, Jones had to do what so many others in the football program have had to do: be patient. Jones stood on the sidelines for two years, in 2012 as a redshirt and last season as a backup to all-Big 12 honorable mention John Hubert.

This season, Jones is finally a major asset to the K-State offense as one of two main options at running back. In just two games, he’s already rushed for 130 yards and four touchdowns on 21 carries.

Jones is back to playing football competitively, which means he’s back to doing what he loves.

Jones’ cheerful personality is present on and off the field — in the huddle and in the classroom — something that wasn’t as evident when he was a newcomer and understudy.

“I can tell a difference in charisma about him,” senior quarterback Jake Waters said. “He’s just so excited to be out there playing with us. He gives 100 percent every single day whether it’s blocking, running the ball or catching. As a quarterback, when I see a guy giving a 100 percent blocking for me, that makes me try and do that much better for him.”

Like his quarterback, Jones’ biggest hurdle was time. Learning an entirely new system isn’t easy for a young player — which linebacker to pick up, what hole to cutback to, where and when to cut on a route.

“Kind of like me, once he grasped the offense he calmed down and just played, instead of thinking about every little thing,” Waters said. “I’ve seen him from spring ball to now, it’s just night and day for him – knowing how to set up his blocks better, what kind of runs he likes and how the offense line is going to block certain runs. It definitely helps.”

Once the playbook became his best friend rather than his biggest enemy, Jones progressed.

Though it’s only been two games, Jones has grown tremendously, according to his teammates.

“I think he plays with a lot of confidence (now),” redshirt sophomore wide receiver Deante Burton said. “After he got that first game out the way, that first big run, he turned up his confidence. That’s something you have to have in a running back — someone who believes in himself — and I know all the other guys on the field believe in him. I’m just really proud of him and the way he’s playing.”

Jones attributes his success mainly to what some call the “K-State Way:” redshirting and contributing as a scout team player, among other things.

“Just staying in the film room and watching the people ahead of me,” Jones said. “I’ve watched John (Hubert) and old film of (Daniel Thomas) and Daniel Sams. I’ve been patient and have taken advantage of the opportunity I had when they threw me in with the ones.”

There’s much more to Jones, his personality and his knowledge of the game of football. But what’s important is that he’s happy.

Jones is loving the game that has always loved him right back.

“When you’re having success like he has been having — he has been running the ball great — it’s obviously fun,” Waters said. “He’s being worry free, but also cognizant of being assignment sound. Being able to just go out and play and know that he has the ability to do some special things is definitely helping him out.” 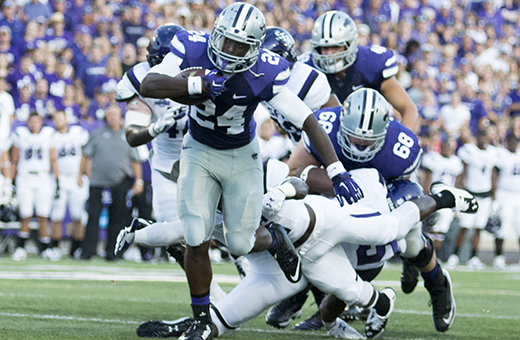 K-State running backs compliment one another well in victory