Joel Klatt remembers exactly what it was like to step into Manhattan, Kansas.

As the starting quarterback at Colorado in 2003, he made his first road start at K-State. Now serving as a FOX Sports college football analyst, his opinions haven’t changed.

“Loud,” Klatt said of the environment. “We played there in ’03 and in ’05 and obviously the 2003 Kansas State team was very good as they went on to win the Big 12 title. They beat us and they were as tough and as physical as a team that I can remember playing.”

Despite being several years removed from his playing career, his perspective of Bill Snyder’s program hasn’t changed.

“There are inherent challenges at Kansas State,” Klatt said. “There’s not a real strong recruiting base, it’s tough to get to among other things. Bill Snyder has turned it into one of the preeminent programs in the Big 12 and in the country and he’s done it twice. The amount of respect I have for him is through the roof.”

ESPN college football analyst Jesse Palmer first visited K-State on Oct. 7, 2010 for its game against Nebraska. The environment made a strong impression on the former Florida quarterback.

“It’s not as big as a lot of stadiums we see, but you wouldn’t know that by the crowd,” Palmer said. “It’s a pretty hardcore environment. It’s very loud, it’s raucous and it’s kind of the epitome of home-field advantage with the hostile environment.”

Palmer never had an opportunity to face Snyder and company in his playing career in Gainesville, but it didn’t affect the admiration he has for the longtime head coach.

“To me, it’s his attention to detail,” Palmer said. “It’s the simple things that I think a lot of other teams overlook. His pyramid and principles have always been playing smart football, no penalties, playing great special teams and not turning the ball over. Every coach says that, but I don’t know how many ultimately live it all the time. That’s one thing that he does and it has shown up throughout his entire career here.”

“If you go back in those games, it’s going to be a common theme,” ESPN college football analyst David Pollack said. “It’s going to be the kicking game, winning the turnover battle. It sounds really basic and really stupid, but it’s how you win games. It’s a blueprint that they use and if they’re going to beat Auburn, it’s going to be time of possession.”

Auburn, who’s coming off of a national championship berth and 11-2 season, returns with a number of key contributors including starting quarterback and Heisman candidate Nick Marshall.

The senior leads a Tiger offense that ranks No. 5 in the country with an average of 52 points per game.

Palmer says he’s anticipating how some of the newest Auburn starters will handle their first road trip tonight.

“This is the first time this year that they’re going to see this and you don’t know how they’re going to respond,” Palmer said. “You can put as much crowd noise as you want through practice week, but ultimately when you get out on national television in this type of environment, with this crowd, it can be very different. There is a bit of unknown for (Auburn head coach) Gus Malzahn in respect to how his guys will respond.”

“In order to play quality defense against what Gus Malzahn does, it’s like the old option offense,” Klatt said. “You hear the word discipline come up. You have to play assignment football on the defensive side, you have to line up correctly and you have to tackle in space. If I were to define Kansas State’s defense from when I played and all the way to what they play now, they line up correctly, they play discipline defense, they know their job and they tackle well in space, so Auburn is going to have as tough as time as they’ve had against anybody in trying to run the football.”

“You know if you’re playing these guys, bring big-boy pads because it’s going to be a knockdown, drag out fight,” Palmer said. “You might win the game, but if you do, you’re going to be in an ice tub after the game. That’s kind of a staple for them.”

Across the board, K-State appears to be much more prepared for its return game on the Thursday night telecast and it’s one that Palmer is eagerly anticipating.

“For a game of this magnitude, this one we all circled at the start of the year knowing how big of a non-conference game it was,” Palmer said. “We were also anticipating the kind of environment it’s going to be.”

Klatt says it’s one of his favorite matchups of the season and is prepared for four quarters of two, well-prepared teams.

“Talent wise, Kansas State will be overmatched a little bit,” Klatt said. “But because of the fact that they play such disciplined football, I would be shocked if Kansas State isn’t in the game late with a chance to win.” 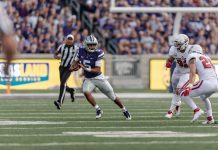 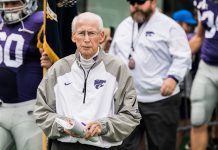 History paves way for matchup against No. 5 Auburn