The book that made me fall in love with fiction was S.E. Hinton’s “The Outsiders.” Hinton made the characters so real that I felt connected to them, even though I have never been exposed to any of the conflicts they went through.

Fiction and fantasy books are looked down upon in the literary world because they are not “real.” But fiction books are real to readers. A really good book has the ability to create a world readers can visit once, twice or as often as they want. Nonfiction books can interest readers if they are passionate about the subject; fiction books can interest a myriad of different readers. I’ve picked up countless fiction novels while browsing bookstores and have bought them because the characters’ world seemed like one I wanted to reside in for awhile.

“The implication, it seems, is that we gain knowledge from a certain kind of text and not from another,” Author Diana Senechal wrote for joannejacobs.com. “This is not so; there is much to be learned from literature, and much in nonfiction that raises questions and draws our attention to mysteries and ambiguities.”

People who prefer nonfiction are ultimately diminishing their ability to grow as a person because they aren’t feeding their brain stories where they have to guess what a character will do or say. Fiction may not be true, but it broadens horizons.

“The psychologists Mar and Keith Oatley tested the idea that entering fiction’s simulated social worlds enhances our ability to connect with actual human beings,” Jonathan Gottschall, a professor of English at Washington and Jefferson College, said in an article for the Boston Globe. “They found that heavy fiction readers outperformed heavy nonfiction readers on tests of empathy, even after they controlled for the possibility that people who already had high empathy might naturally gravitate to fiction. As Oatley puts it, fiction serves the function of ‘making the world a better place by improving interpersonal understanding.'”

The Oatleys’ discoveries have been backed up by other scientists as well, reconfirming the fact that fiction helps make our world a better place. If our society read more fiction novels, we would be more welcoming to diversity.

The beauty behind fiction and fantasy books comes from the multitude of characters, all from different facets of the world. These characters go through situations that may be hard for us to understand because we’ve never experienced them, but after reading about them we have the capacity to understand why they were in those situations and why they handled them the way they did. There is a reason for the many different subgenres of fiction; it’s because authors want to expose their readers to a world they never would have known upon opening the book.

Rivka Galchen said in the New York Time’s Sunday Book review titled, “What’s Behind the Notion That Nonfiction is More Relevant Than Fiction?,” that “because we are less sure what fiction is ‘saying,’ we are less preemptively defended against it or biased in its favor. We are inclined to let it past our fortifications. It’s merely a court jester, there to amuse us. We let in the brazen liar, and his hidden difficult truths.”

Fiction and fantasy novels are full of ideas, concepts and hidden messages waiting for readers to discover and apply to the outside world. Fiction doesn’t just satisfy our need for change from our mundane worlds, it makes us better, more knowledgeable people. Reading a non-fiction book only satisfies our thirst for confirmation of the truth.

I know what my interests and beliefs are. I also know that they differ from other people, but I am confident in them. I read books not to relearn what I already know, but to help me escape from my reality into someone else’s uncertainty.

Erin Hildreth is a freshman in mass communication. 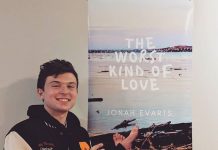 Freshman Jonah Evarts has self-published not one, but two novels in the past year. 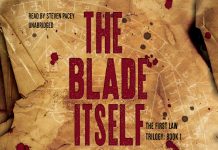 REVIEW: ‘The Blade Itself’ is a wonderful, painful read