The next Lockett family gathering should make for some interesting dialogue.

Lockett moved up the list once more later in the 58-28 victory, passing Michael Smith (1988-91) for third all-time. The only players left to jump on the legendary list are current Green Bay Packers wide receiver Jordy Nelson (2003-07) and his father Kevin Lockett (1993-96).

“It’s a great accomplishment,” Lockett said. “My uncle came down earlier this week and kind of gave me the heads up on it, (because) I didn’t really know. He was just like, ‘You have ten yards until you beat my record.’ But it was one of those things I didn’t really think about, I just wanted to come out here and win. We had a loss last week so we just wanted to bounce back.”

The Tulsa, Oklahoma native’s performance Saturday was just another indication of how important he is to K-State. Lockett tallied 256 all-purpose yards and two touchdowns. More than half of the yards came from the punt return game where Lockett amassed 143 yards and his first-career punt return touchdown.

Despite all the accolades, the chants and family name, Lockett remains humble and hungry in his pursuit of helping the Wildcats get better every day, every game.

“He probably doesn’t care,” fellow senior wide receiver Curry Sexton said. “I know him and his uncle Aaron are really close — Aaron was just at practice the other day — so I’m sure they’ll give each other some crap about it. I’m sure (Tyler) Lockett will take some jabs at him, but Tyler doesn’t care about that stuff. He probably doesn’t even know, if you told him he’d probably just say ‘Okay’ and laugh, that’s just the kind of person he is. But good for him, he deserves it, he’s worked for that.”

Still, Lockett is nearing the record K-State fans have spoken about since last year’s breakout season — the one his father has held for nearly two decades. Lockett has at least eight games to haul in 564 receiving yards to break Kevin’s record. Eight more receiving touchdowns will also break his father’s all-time career mark of 26.

Head coach Bill Snyder hasn’t spent much time speaking with Tyler about the record books, but he does recognize the importance to the Lockett family as a whole.

Time will tell if the record books will need updating, and it’ll be even more time before Lockett truly looks back on his accomplishments in four years at K-State.

“I just look at it like it’s an individual thing and I can look back at that stuff at the end of the season,” Lockett said. “Right now I want to win as many games as possible and get us to the Playoff.” 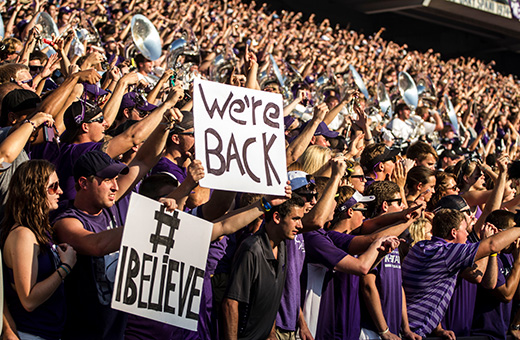 Special teams: one of many blueprints for K-State’s success