Home Sports Football Miners dig own hole against No. 25 K-State

Defense has plagued K-State (3-1, 1-0) through its first three games, but against the the Miners (2-2), the Wildcats’ turned around their defensive performance, allowing only 59 rushing yards on their way to a 58-28 victory.

“We dug ourselves a hole in the first half,” Miners head coach Sean Kugler said. “We could not move the ball, and they were a big part of that.”

With running back Aaron Jones, who ranked fourth in the nation in total rushing yards with 549 yards through three games, the Miners had a highly touted rushing attack coming into Manhattan.

This all seemed like an afterthought after the game as Jones only rushed for 47 yards.

“Kansas State’s defense is one of the best run defenses that I have seen in a long time and the were very affective in stopping the run,” Kugler said. “They forced us to do some things that were a little out of our comfort zone.”

For a Miner team that held a lead in the fourth quarter against Texas Tech earlier this season, the Miners looked completely over-matched against the Wildcats. The UTEP defense, who looked formidable in their first few drives, self-destructed as the Wildcats hit their stride.

Sophomore running back Charles Jones and company carried a strong running game throughout the afternoon. However, they began relying on the pass toward the second half, taking advantage of a Miners’ tired defense.

K-State passed for 263 yards, while having seven passing plays of 20 or more yards.

On the ground, K-State tormented the Miners defense with the Wildcat formation as they approached the end zone. Jones notched three touchdowns on 76 yards, while showing an ability to carry UTEP defenders on his back as he built his game yardage.

In total, the offense scored six touchdowns on the ground and ran for 188 yards. They had four players with rushing touchdowns, including the three by Jones and one each by senior running back DeMarcus Robinson, senior quarterback Jake Waters and sophomore backup quarterback Joe Hubener.

The difference maker for the Wildcats was their poise in the red zone. They went six for six in the red zone, and other then kicking a field goal on their first drive, they scored on the ground in each of those opportunities.

Waters, who began to get into a rhythm early in the first quarter, finished the game with 29 rushing yards. In total, he went 10 for 15 through the air.

The Wildcats had an impressive first quarter showing on defense, allowing a total of nine yards to their opponent’s offense. To illustrate that point even further, the Miners didn’t surpass zero yards of offense until the last play of the quarter.

“In the first half we had three consecutive three-and-outs and you can’t get much better then that,” head coach Bill Snyder said. “On the sixth and last possession of the first half they got a first down, and as I told our players, I’m kind of glad that happened because I had something to complain about when I got into the locker room at halftime, otherwise I would have been speechless. Our defense played well.”

The special teams started their impressive showing early in the first quarter by blocking the first Miners’ punt. They also blocked a second punt in the quarter before it was overturned due to an inadvertent whistle.

“In reality, we had four game-hanging plays, two blocks and two returns, both were for touchdowns,” Snyder said. “One of (the returns) was called back, and a block was called back. I say called back (on the block) because we had a chance to catch it, but we had someone out there that was dreaming and failed to catch the ball.”

In his second game since taking over punt return duties, senior wide receiver and returner Tyler Lockett was nearly unstoppable throughout the game. After having an early touchdown return called back because of a hold, he rattled off a blazing 58-yard touchdown return where he outran the coverage for the first punt return of his career.

“We did a nice job of getting a blocker on a defender and maintaining and sustaining our blocks,” Snyder said. “Tyler (Locket) did a nice job at being able to sort and pick his way through.”

“It’s a great accomplishment,” Lockett said. “My uncle (Aaron) came down earlier this week and kind of game me the heads up on it. But it was one of those things I didn’t really think think about, I just waned to come out here and win.” 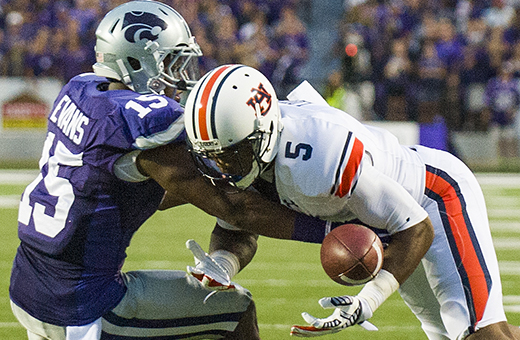 Grading the Game: K-State vs. Auburn