“It’s a balance between chaos and serenity.”

“You’re in an uncontrolled environment, and you only have control of what you do,” Loadholt said.

Over the weekend, the parachute club celebrated its 50-year anniversary. Members held a three-day skydiving event (they call it a “boogie”) at the Abilene Municipal Airport in Abilene, Kansas. Current and alumni club members joined skydiving enthusiasts from around Kansas, Nebraska and Missouri in taking the plunge from a Short SC.7 Skyvan at 13,500 feet above Kansas.

Jesse Magana, 1990 alumnus in business management who made his first jump in 1987, said the club was started back in 1964 when a group of K-State students decided they wanted to learn to skydive. However, they didn’t know how to go about it and ended up collaborating with skydivers at Fort Riley. The partnership persists to this day — although now it’s the parachute club that trains soldiers in sport skydiving.

Magana said that for a long time, the club didn’t have a home and jumped wherever they could, including Herrington, Hutchison or Topeka. It wasn’t until the early ’80s when a professor named Bill Dawes got involved and bought a plane for the club to use and gave them a home in Wamego. The club has since bought their own plane, a Cessna 182, and moved to Abilene.

“We are really the one collegiate skydiving drop zone that owns and operates their own airplane and equipment,” Magana said. “A lot of college clubs are associated with a commercial drop zone. We’re basically college run, with the assistance of alumni, like me, that are local.”

Magana said alumni assistance and students teaching students is the way the club has survived.

“The way we try to do it over the years, if you get someone to start skydiving when they’re a freshman or sophomore and they can get enough jumps to become an instructor … and if you get someone that can stick around for a few years, they can pay it forward,” Magana said.

Although the culture of the club has always remained the same, skydiving itself has changed.

Ed Goff, 1989 alumnus in electrical engineering technology who made his first jump in 1982, first learned to skydive they were still using the military style round chutes.

“The landings were very brutal,” he said. “You spend half your class learning how to do that landing, where you hit and roll and try to distribute the impact over the fleshy parts of your body instead of the bony parts.”

But even while Goff was at K-State, the sport was still evolving and soon jumpers transitioned to using the now very-recognizable, rectangular chutes. According to Goff, deaths in skydiving used to be from gear malfunction. Nowadays, the gear is extremely reliable and deaths are usually operator error or jumpers that are pushing the limits and challenging themselves.

Even K-State’s reception of the parachute club has changed. Goff and Michael Smith, a 1988 architecture alumnus who jumped for the first time in 1983, said they remember when they made a jump into the football stadium before a game.

But Smith said those big moments are not what stands out to him. It was the everyday jumps and the skydiving community at K-State that he remembers most.

“We were all in different majors and there’s no way I would have met each if not through skydiving,” Smith said. “I don’t keep in touch with anyone from my major or K-State – it’s these guys that I’m still friends with. There’s lots of moments, like jumping into the stadium, that were just fantastic; that we’ll always remember. But it was overall just looking forward to the weekend, getting your homework done so you could go out skydiving.”

The 50th anniversary is a mile-marker for the club, but Loadholt said he hopes to see the club grow even more in coming years.

“I hope to see the club get bigger,” Loadholt said. “Maybe a bigger plane, or a boogie every year, and more members. To me skydiving is a lifestyle … and at the end of the day we’re just like a family.”

Editor’s note: The story was updated at 7:25 p.m. to reflect updated information. 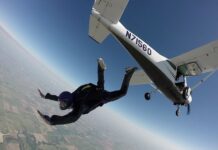 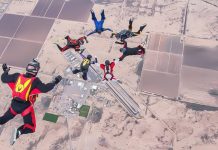 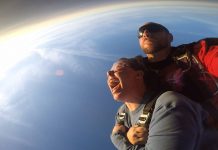