“OPUS is a great way to kick off the semester and bring local bands in the community together,” Zach Bailey, junior in entrepreneurship and UPC music co-chair, said.

Featured acts were wide-ranging in genre and performance styles, providing an exciting four-hour concert. The OPUS experience includes rock, rap and the ever popular experimental sounds of local bands.

The soulful and smooth Whooligans garnered a strong reaction from the crowd with their bluesy tune “Favorite Color.” The song had a smooth groove and was easy on the ears, just like their entire performance.

“It’s about that guy that never let’s you know what’s up,” lead singer Aliyah Leana said, giving insight into the song. “Everyone relates to it.”

The only rap act of the night, John Deterding as “Whyte Lyte,” stood out with his unapologetic positivity and crowd-pleasing rendition of B.O.B. and Paramore’s “Airplanes.”

K-State alumna Hope Burke made the trip back to campus to see the newest local acts in Manhattan.

“OPUS is always a great time,” Burke said. “I was lucky enough to be in town and couldn’t miss it.”

The vocal prowess of Jade Archetype stood out with a voice that was never difficult to listen to, even when lead singer Alexa Sharp branched off into a short rap verse. Their performance put them up against the soulful vocals of the Whooligans.

As Parallel Path took the stage, they immediately became a force to be reckoned with. At the end of the night, they walked away with a well-deserved third place. Their evolving sound throughout their performance included a saxophone on a Spanish jam performed by Bondy Valdovinos-Kaye (another K-State alumnus who performed in local Joshua Jay and the Nighthawks in last years OPUS) had a closing atmospheric rock song that showed off their musical skills.

Wax Eye was a main contender with a performance that took second place, ahead of Parallel Path. Wax Eye was an obvious favorite with a sound that moved the crowd and elicited the most engagement from the local music fans at Bosco Plaza.

Vick G. Trio took first place and rightfully so. Their performance was solid from start to finish with lead Vik Govindarajan’s mastery of the piano intriguing the audience and forcing them to move to Trio’s soulful sound. Bassist Andrew Shaw and drummer Danny Peete, senior in marketing, were each impressive in their own right, but as a unit they commanded a musical prowess that stole the show. 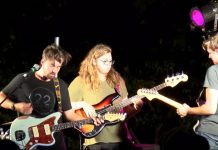 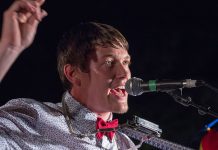 Behind the scenes with UPC’s OPUS