Your parents want the best for you. Most people believe this automatically from childhood. But, what if what your parents thought a modification of your brain was best for you?

K-State Theater opens its 2014-15 season the dramatic exploration of the relationship between parent and child that is, “Monkey Monkey, Bottle of Beer, How Many Monkeys Have We Here?” by Marsha Sheiness.

The play, also known as “Monkey Monkey” for short, is directed by senior in education and theater Cory Jennett. The show’s action centers on a group of women who accept a mysterious offer to turn their mentally-handicapped children into geniuses through an experiment.

Jennett said he chose the show because society’s view and pressures on mothers interested him, as did the journey each character undertakes to achieve their goal of simply being a better person.

“I feel that this show goes far beyond just mental disabilities,” Jennett said. “It’s a show about these mothers who have all grown from this one hour in a waiting room. I believe that the college students coming to see the play will be able to see the relationship they have with their parents in this, and take an outside view of this relationship.”

This waiting room environment is set on the Purple Masque stage, K-State’s black box-style theater located within East Stadium. The stage is just feet from the audience, so the show’s viewers will be able to catch every facial expression.

“One of the biggest challenges is that it’s a very intimate theater and so as an actor it’s often intimidating to be that close to the audience and be that exposed,” said Mitch Ward, junior in theater who plays character Joe. “But it provides a unique, interesting, exciting experience for the audience.”

The long and perhaps confusing title of the play is derived from a little known maternal nursery rhyme. Performers in the show used their closest maternal resources to research and approach their characters.

“I talked to my mom,” said Dani Golway, senior in public relations and character Mrs. Lewis. “I asked her, ‘How would you feel if you had two children to take care of and not enough money to take care of them?’ and I ran with what she gave me. That’s a lot of what my character came from.”

Each actor dealt with the material differently. Tori Ptacek, junior in theatre and Mrs. Evans in the show, said that she chose to find the emotional link between herself and her character. According to her, becoming a mother from there was easier.

Golway and Ptacek both said that the group collaborated to make a unified vision for the performance, and are excited to share it. Jennett said he is proud of the performers for how they have overcome the challenges of the material and style of the play.

“All of these mothers go through different things,” Jennett said. “Just like life, people are going through so may different things that they have to evolve with and adapt to and learn to become stronger.”

The K-State production opens today at 7:30 p.m. Golway said that the kind of show she and her cast have may not be what college students are expecting.

“I think people our age have this thing in their head that every theater show is Shakespeare, and this is not Shakespeare,” Golway said. “This is real life, things you can relate to. Theater is a slice of life; you take a little bit of life from this production.”

Ward said he hopes that audience members will be able to connect and relate to the show in the way he’s been able to, and if nothing else, enjoy themselves.

“We’re all having daily struggles in college, but the worst theatrical experience is a great one and you’re gonna get more out of this than you’re ever gonna get out of Netflix,” Ward said. “See theater.” 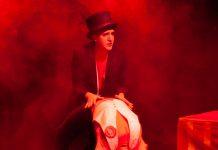 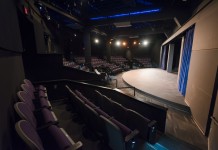 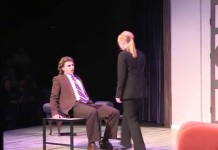 “No Exit” for KSU Theatre