Q: From the first game of the season, Texas Tech has struggled to find defensive consistency, especially against the run. Do you believe the change in the coaching staff will provide upside in production?

Former defensive coordinator Matt Wallerstedt had a very solid grasp of the technical side of defense and was really good at drawing up different plays and schemes that should have worked. The problem with Wallerstedt’s system is that it gave players too much to think about while they were on the field. Every player was trying to do too much and it resulted in a confused defense that couldn’t make stops and especially couldn’t force turnovers.

Red Raider linebacker Sam Eguavoen said now that Mike Smith has taken over, playing defense is a lot less stressful. Smith himself said he’s trying to focus on the fundamentals or the “bread and butter” of defense, including filling gaps, staying in coverage and most importantly, wrapping up and making tackles.

Q: Saying Davis Webb is important to the Texas Tech offense might just be an understatement. How do you feel he has progressed in Kliff Kingsbury’s offense?

The 2013 season threw a wrench into Davis Webb’s career. With the back and forth competition between him and Baker Mayfield and the question of Michael Brewer returning, Webb did not have the chance to develop in the backup or starter role. We saw his best career performance so far after he was named the starter and had time to prepare for the Red Raiders’ 37-23 upset of Arizona State.

After that game, both Webb and Kingsbury were praised and the hype for the 2014 season began. It was probably too much hype. Through the first four games of the season, Webb has shown the calm confidence he had in the Holiday Bowl, but more often he has looked nervous and tried to force passes where there isn’t space for them.

Q: Bradley Marquez has been hauling in touchdown catches at a strong pace. How has he progressed through his career to put up these types of numbers?

In Monday’s press conference, Marquez was asked about being a national leader in touchdown receptions and he responded by saying all he knows is that the team is 2-2 when it should be 4-0.

The senior wide receiver has developed into a leader on the team for being that way and was even named a captain of this year’s team after staying for workouts during the summer instead of going to play baseball in the Mets minor-league system. He has done that for the past three seasons. His downfield blocking ability is one of the biggest areas of growth in both ability and leadership recently. Throughout the 2013 season and first four games of this season, Marquez has been involved in nearly all downfield receptions, either catching the ball or blocking to give his teammates room to run, and it’s something he prides himself on.

Q: Penalties have been a serious area of concern for Texas Tech. What will it take to reverse the trend?

If you ask any members of the Texas Tech coaching staff, they are doing everything they possibly can think of to cut down on penalties. There are referees in practice almost every day and on Monday, Mike Smith listed off a whole slew of workouts the coaches have made the players do in practice for committing penalties. Marquez even said the captains of the team have met with the whole team and called them to cut down the penalties.

The main problem causing the penalties, especially on the defense, is the lack of experience that comes from playing freshman and junior college transfers. Now that these players have a few games under their belts, the amount of penalties will likely start to decrease. In order for a sharp decrease, however, each player is going to have to make a conscious decision and stick to it during the game.

Q: K-State has beaten Texas Tech in the last three games played. However, the Red Raiders hold the edge in the overall series. Who do you give the edge to on Saturday?

The Tech defense knows what’s coming this weekend and although it will improve from the dismemberment it endured against Arkansas, K-State’s offense will still be too much for the Red Raiders. The Wildcats will defeat the Red Raiders 45-35. 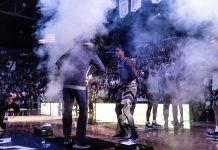 Wildcats come back against Texas Tech, win 42-35 in overtime