Fast paced speed, intensity and sneaky abilities all add up to one sport, paintball. K-State’s club team, the largest they have ever had, begins their season on a mission to make nationals.

“This sport transcends all those boundaries between male and female; tall, short, fast and slow,” Clinton Meyer, third-year player and president of the club, said. “Anyone can play this.”

Senior Ellen Drummond, one of six women on the team and a first-year player said she feels the welcoming and supportive environment.

“I just get out there and play,” Drummond said. “All the guys are really welcoming and accepting.”

Many are unfamiliar with the sport of paintball. There are two types of paintball events, recreational and competitive. The recreational side is purely based on having a good time. The competitive side consists of two teams that compete on a small field with several inflatable bunkers scattered throughout the field.

The primary objective for both is not to get tagged by a paintball and have one of your teammates as the last one standing. K-State’s club team participates in each style of play.

Protection against being “tagged,” or getting hit by the little balls of paint, requires some necessary equipment.

“The biggest thing to stress is mask first,” third-year player and senior Elfido Martinez said. “Then the paintball marker, the hopper, which holds the paint and your tank. Besides that, we wear jerseys and pants.”

Martinez said paintballing is a thrill. His favorite aspect is that a game that could last anywhere from ten seconds to over two minutes. However, it will always be fun for those who participate.

Chris Fisackerly, a third-year player on the team, described paintball as an aggressive sport and a great stress relief.

“K-State is all about becoming a family, and we are trying to build on that family, just like any other program or sports team,” Fisackerly said. “We are all about working together and coming together as a community.”

According to Meyer, the team takes a series of steps to ensure they are ready for competition.

“You want to stay focused,” Meyer said. “Always be in communication. When we get to the field we make sure that all of our gear is ready to go and one of the key things we do is we go out and walk the field. We look at the positions of the bunker and try to find a lane. There are strategic points on every field.”

The K-State paintball team has had two events so far this semester. The first event was recreational to provide some experience for all of the new members and give them a taste of live action. The team also competed in Hutchinson, Kansas.

“We competed against OU, Texas Tech, and Arizona State, a whole bunch of teams,” Meyer said. “For our first time competing against other colleges in over seven years, we did well.”

“You can take anyone and put a paintball marker in their hands and just let them shoot at a tree or stick and they will smile,” Meyer said. “It’s a blast.” 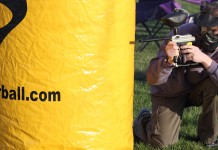 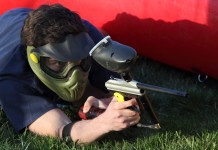