Although Baylor escaped Austin with a victory, quarterback Bryce Petty was exposed. The senior was held to 111 passing yards against a Longhorn team that has the fifth best passing defense in the country. The Bears have their biggest test of the season so far when they take on the Horned Frogs next Saturday.

The Horned Frogs came into their game against Oklahoma as an overlooked team and the underdog. However, they absolutely exposed the Sooners, calling into question the reliability of their offensive line and the running game. A new challenge exists now for the Horned Frogs as they have to handle the pressure of being highly ranked in a conference filled with upsets waiting to happen.

Next week, they will test how good their stout defense really is when they go into Waco, Texas and take on the potent Bears.

The Wildcats seem to be on quite a roll, having won by a combined 62 points since losing to Auburn at home on Sept. 18.

Senior quarterback Jake Waters has been lethal with his arm and deceptive on his feet. He is on pace to surpass all of his passing statistics from last year, and can make a statement if he can lead the Wildcats into Norman, Oklahoma and come away with a victory in two weeks.

Before this week, the Sooners had a firm hold of the No. 1 rank for multiple weeks. After this week, questions have been raised if sophomore quarterback Trevor Knight can lead this Sooner team to the College Football Playoff. With the Horned Frogs limiting the scoring opportunities of the Sooners, Knight had the game placed on his arm and he let his team down with two interceptions.

With their victory in Jack Trice Stadium, the Cowboys are one of only five teams in the Big 12 to be undefeated in conference play. After last week’s win over Texas Tech, many questioned whether Oklahoma State was a legit contender in the Big 12.

After a likely win against Kansas on Saturday, they’ll have a shot to prove themselves against TCU on Oct. 18.

The Mountaineers are constantly improving and have proven that they can play against anyone. Throughout the first half of their season, the Mountaineers have continually played in close games. They have lost by a combined 22 points against the only two ranked teams they have played (Alabama and Oklahoma). This Mountaineer team has the potential to beat anyone in the Big 12, as well as for marquee upsets against the top of the league.

After beating Kansas last week, the Longhorns ran into a wall against Baylor. While they did expose some of the issues that the Bears had in the passing game, they couldn’t manage to get any momentum with their offense.

The Red Raiders continue to shoot themselves in the foot with a horrible combination of being near the worst in the country in turnovers and penalty yardage. They are the worst in the country with 102.2 yards per game. It is something that will continually lead to losses for this Red Raider team and can only be fixed if head coach Kliff Kingsbury takes control of his team.

With their only win coming against in-state rival Iowa, the Cyclones are just hoping to not fall apart in the second half of the season. While some calls against Iowa State have been questionable, this team has not played well over the last few weeks.

The Cyclones are in the same shoes as the Jayhawks and, lucky for them, they play Toledo next week, which should allow them pull off a win.

Kansas’ season outlook looks disappointing. After the firing of head coach Charlie Weis two weeks ago, the Jayhawk players have almost nothing to fight for and look to win at least one game in Big 12 play, which will be a true challenge for this team. 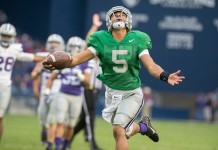 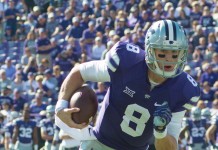 West Virginia’s White makes his debut in the rankings