Every year, the K-State men’s lacrosse club hosts its alumni for a scrimmage with its current squad. This year carries a much deeper value, however, as it is the club’s 25th anniversary.

To commemorate, the current team is facing off against the alumni on Saturday, in a tournament from 8:30 a.m. to 5:30 p.m. at Memorial Stadium.

K-State started their club lacrosse team under the eye of a legendary West Point player and graduate, Donaldson Tillar, III. The 1st Lieutenant at Fort Riley began to realize just how little lacrosse was played in Kansas, but was up for the challenge in coaching the inexperienced players.

He got the team to be very competitive as he showed them the tricks of the trade.

Fourteen months later, he was deployed to combat in the Persian Gulf War and was a Black Hawk. As the war was coming to an end, Tillar was killed in action on Feb. 27, 1991.

He will forever have his name etched deep within the K-State lacrosse family.

“Donnie’s legacy and ultimate sacrifice for our country is wound into the culture of the KSU lacrosse team,” K-State alumnus Wesley Briggs, who joined the team in 1993, said.

“He had a huge impact on me as well as most of my other teammates,” Thurman said. “Not only was he the best lacrosse player we had ever seen, but he was even a better person. I can honestly say there are not too many days that go by that I don’t think of Donnie.”

“The story of Donnie brings our whole team together as one,” Liberatore said. “We are all brothers that play in honor of a great man.”

Briggs highly anticipates the weekend ahead as he is coming all the way from Saskatoon, Saskatchewan, Canada.

“I am very excited to get back to K-State,” he said. “(It’ll be good to) connect with old friends through lacrosse.”

The weekend kicks off with practice and dinner on Friday night where the current players will be able to meet the alumni and hear their stories. It’ll be followed by the big tournament the next day and finished off with a banquet on Saturday evening. All activities are new for the special occasion.

As the game continues to grow at K-State, it also shows promise in the state of Kansas. About half of the 28-man roster hail from the Sunflower State.

The main contrast between the alumni and the 2014-15 team is experience. When the club first started, about 25 of the 30 players had never picked up a lacrosse stick before.

“I never had the opportunity because I grew up in Overland Park, Kansas,” Thurman said. “Lacrosse was not played in the Midwest at the time.”

In contrast, Liberatore said only eight players off of this year’s team had no experience prior to coming to K-State.

Despite going 4-19 through the last three years, there are high hopes for the team to do well this year. Liberatore said the constant need for running put a damper on a smaller roster. However, the larger roster should help in rotations and substitutions.

As former team members arrive in Manhattan, the current team is excited to show its ability in front of more alumni than ever before. Although the games will be competitive, the memories of Tillar as a friend, leader, hero and coach will resonate throughout the weekend’s festivities. 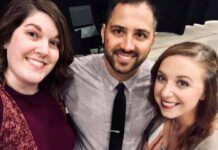