Anybody with a brother or sister knows sibling rivalry is real, and can be funny, but never quite growing out of sibling squabbles can be hilarious. Nichols Hall has turned into a side porch battleground for three siblings to unpack unfinished business to the delight of an audience.

K-State Theater’s first, main stage production “Vanya and Sonia and Masha and Spike,” by Christopher Durang is now playing in the Mark A. Chapman Theatre in Nichols. Directed by Assistant Professor of Theater Jerry Jay Cranford, the cast made up of theater majors, non-theater majors and graduate students takes on the 2013 Tony Award winner for Best Play.

“It was an interesting piece for me to work on, to look at and propose,” Cranford said. “I proposed it knowing that it had just been released as a hot property and also won every major award in New York for best play.”

The list of awards the show raked include the 2013 Drama Desk, Drama League and Outer Critics Circle.

Praised for its comedic take on a perhaps gloomy situation, “Vanya and Sonia and Masha and Spike” centers on three siblings. Each named after one of renowned Russian playwright Anton Chekhov’s characters, the siblings quip and quarrel when movie-star Masha returns to her family home to find a bitter Sonia and an aggravated Vanya ready to reprimand her. Add to the mix Masha’s young flirtatious new beau Spike. The show promises to offer laughs to those familiar with Chekhov or not.

“(Durang) made a comment that this was not meant to parody or emulate any of Chekhov’s works but be a comic homage to the themes,” Cranford said. “That is evident, there are structural nods to “Three Sisters” and the selling of the house. Thematically the pieces are there but it’s sort of turned upside down and approached with a comical tone.”

Students in the production found the comedy aspect demanding but rewarding. Cat Huck and Mark Young, juniors in theater and Masha and Vanya respectively in the play, both said the audience will enjoy their funny moments.

“You’re gonna laugh,” Huck said. “You’re gonna purely laugh. The comedy is so hard. It takes so much energy. Comedy is more difficult but more fun.”

Young said he has a much easier time with comedic pieces, and is excited to experience full audience reactions.

“It’s easily the funniest comedy I’ve been in,” Young said. “It’s put me back into enjoying acting. The fun has been renewed.”

Along with comedy, the show presents situations and decisions that people may find relatable. Cranford said his goal was to shape the piece so that the performers could find silliness within seriousness.

“To me, the basic concept of this piece is the reunification of this broken family,” Cranford said. “The end of it becomes very silly and funny, it’s a treat and they do it very well. I am proud of them.”

Huck said she agreed with Cranford, expressing her wish for the show’s themes to the audience.

“I hope it’s got an underlying sense of family and how important that is,” Huck said. You can’t ever really get away from your family, and this one has to learn how to love each other again.”

“Vanya and Sonia and Masha and Spike” focuses greatly on the ages of the characters. College performers in this play will have to play characters that are 30 or more years older than they are, but the final product will be a challenge and exposure to great material, according to Cranford.

The K-State Theatre season is constructed to offer students the opportunity to sample ideas and grow, as well as to expose the student body and community to works of acclaimed and powerful theater.

“Over the course of four years we try to hit several genres,” said Jennifer Vellenga, assistant professor of theater and director of the theater program. “So in someone’s four year education they can get a sampling of many different genres of plays.”

Development has been the actors’ favorite part of the process. Describing his character, Sam Johnson, senior in pre-dentistry, said, “If there was a message, it would be not to be like Spike.”

“It’s a funny show with quirky characters and I’m excited about it,” Johnson said. “We’ve been working really hard and want to show it to people.”

Thursday night’s performance played to a sold-out crowd, and Vellenga said she is thrilled to see students and community members supporting the main stage production.

“Our big mission for the year is to fill our seats,” Vellenga said. “For the first of our season, we’re just really excited to see how it goes. It’s really exciting to see students engaging with us. It seems like it’s taking off.”

K-State puts on seven, main stage productions during the course of a school year: three plays, one musical, an opera and two dance concerts. In addition, second stage productions in the Purple Masque Theatre are also put on, ranging from six to eight throughout the year. “Vanya and Sonia and Masha and Spike” will play in Nichols tonight and Saturday, as well as next weekend.

“The cast is not only good, they are great and it was exciting to watch them make it all their own,” Cranford said. 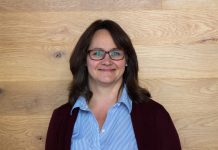