Dawson was not the reason his unit allowed 61 points to Baylor. He was disruptive with two sacks, a pass breakup and a forced fumble. He also had 18 total tackles in the contest. After Saturday’s performance, he is first in the Big 12 in tackles per game with 11.0 and fourth in tackles for loss with 1.40 per contest.

After facing two top five teams, TCU faces another challenge with No. 15 Oklahoma State. The squad is 25th in the country in points per game (37.2), so Dawson will have a sizable challenge with head coach Mike Gundy’s offensive units.

Heeney’s team lost on Saturday, but he had a monster game with 14 total tackles, 3.5 tackles for loss and a sack. The Jayhawks allowed just 3.1 yards per carry, which slowed down Oklahoma State’s prolific offense.

Heeney leads the Big 12 in total tackles and tackles for loss. His relentless pursuit of the ball makes him a humongous asset for the Kansas defense.

Oakman earned a spot in the power rankings this week because of his play earlier in the season. He had a nice day on Saturday, which added to an impressive list of games for him so far in 2014. He had seven tackles and one tackle for loss in his team’s wild victory against TCU. He also recovered a fumble.

Oakman has been very disruptive in the backfield throughout the season. He ranks second in the Big 12 in sacks per game, as well as fifth in tackles for loss per game.

The junior pass rusher must get to the quarterback this week when his team faces West Virginia. The Mountaineers earn the seventh most yards per game through the air, so Oakman’s pass rush will be vital for his unit’s success.

Sanchez’s season has been all about creating havoc in the secondary. He has intercepted a pass in each of the Sooners’ victories this season.

Last week against Texas, Sanchez turned his interception into a 43-yard touchdown. His five takeaways this season are the most in the Big 12. He has broken up three additional passes, which brings his total of passes defended to eight. That is tied for the third best in the Big 12.

The Sooner’s opponent this week is K-State. A lot of the pressure for the defense to play well falls on Sanchez’s shoulders. If Sanchez can disturb the Wildcats’ offense, Oklahoma has a good chance of earning a victory.

After starting the season strong, Brown has had pedestrian numbers in in his past two games. He has not had a sack or a tackle for loss since the Longhorn’s matchup against Kansas.

Brown is still a force in the middle of the field. It is difficult for defensive tackles to accumulate many stats because it’s easy to double team them with a center and a guard. Brown’s ability to command double teams frees up his teammates to make plays. That’s why Texas is tied for the conference lead in sacks.

Brown could start making plays for himself again on Saturday against Iowa State. The Cyclones offense has not been good, so look for Brown to have a big day. 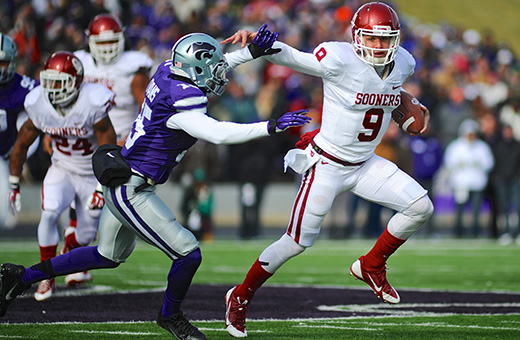