Robert arrives hours before each home game and makes his way through tailgaters, taking photos with fans, sharing his predictions and enjoying the food, on his way into the stadium. (Alyssa Lallay | The Collegian)

When stepping into Memorial Stadium in Lawrence, Kansas on Oct. 13, 1973, all Robert Lipson could prove was that he was there to see the Sunflower State rivals hook up in their Big Eight openers.

Now, 41 years later, the super fan carries a streak of attending 161-straight road conference games that began on that second Saturday of the month.

For the Sullivan County, New York native, coming to Manhattan, Kansas was a road to a potential career in biology with an emphasis in protozoology and virology, which were two of his biggest interests at the time.

Though an academic career didn’t seem to fit for Lipson, his interest in K-State football still stands unparalleled to this day.

Other than Bill Snyder, four coaches have stepped to the forefront of the Wildcats’ program since Lipson first attended games. When he first began his attendance stretch, Vince Gibson was in the midst of his seventh year in Manhattan and Lipson is the first to admit that K-State was the lowest of lows in the college football world.

“When Stan Parrish was the coach here, and even Jim Dickey before him, the only two games that I bought tickets for were Kansas and Nebraska,” Lipson said. “They always sold out. Nebraska traveled and filled up our stadium and the Kansas game sold out because it was a big deal even when both teams sucked.”

When he first attended games as a student, he was without his, now customary, purple foam finger, but a tradition that led to the modern versions of Lipson’s gadgets began with a homemade creation. 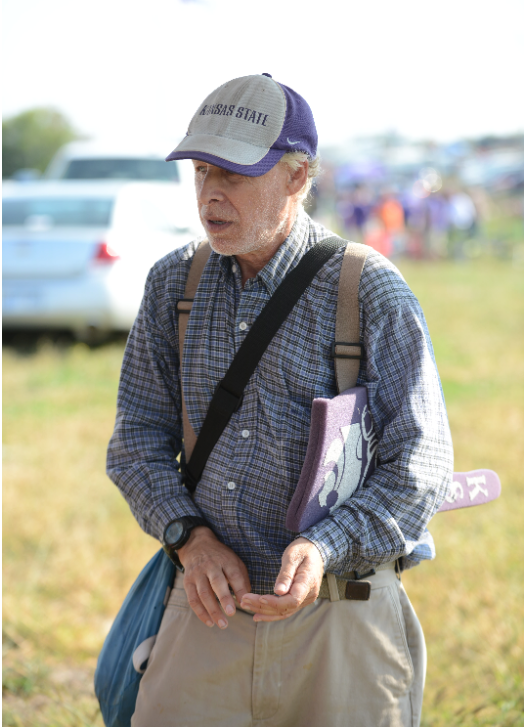 Robert can always be found with a foam finger in hand at all K-State games. (Hannah Hunsinger | The Collegian)

“When I was a student I would always buy the (K-State) pennant,” Lipson said. “I’d tie them to a stick and bring them to games. But when (they) came out with foam fingers, I purchased those. When Ballard’s Sporting Goods was still operating, Steve Ballard used to order foam hands for me and I’d ask for overrun samples. So I have a supply. I have to have something in my hands when I go to games and this identifies me in some way. I always carry it around when I’m at bowl games, tournaments, road games and home games.”

Not known to be the most durable of fan necessities, foam fingers have a rather short lifespan. However, with demand comes supply, and Lipson is armed and ready with extras for the present and future.

“I use about one of them a year,” Lipson said. “I’ll start a new one for basketball, but I have enough to keep me through this decade and into the next. I’ll probably have to make some by myself out of cardboard or whatever when I run out. I’ll have to look for them at K-State’s Super Store if they have them there or the Cat Claw or something like that.”

Lipson didn’t specifically mention how the door to the Vanier Football Complex opened for his increased exposure to the team, but he’s grateful for the trend that began in the late 1970s.

“When Jim Dickey was here, I would go to practices; I was unemployed and drawing (workers) compensation,” Lipson said. “I’d come to (Vanier) and watch practice and attend team meetings and know the players and coaches really well. I did some of that with Stan Parrish and it carried over into Bill Snyder. I guess he knew who I was at the time and let me hang around here.”

Hunger for K-State football isn’t all that brings Lipson to the complex. He also serves as a salesman for Brown & Bigelow, a local distributor of pens, calendars and office supplies.

Outside of his business ventures, Lipson carries close ties with the equipment department for the team. In fact, he’ll often assist with the loading and unloading of the game equipment for home and away games. 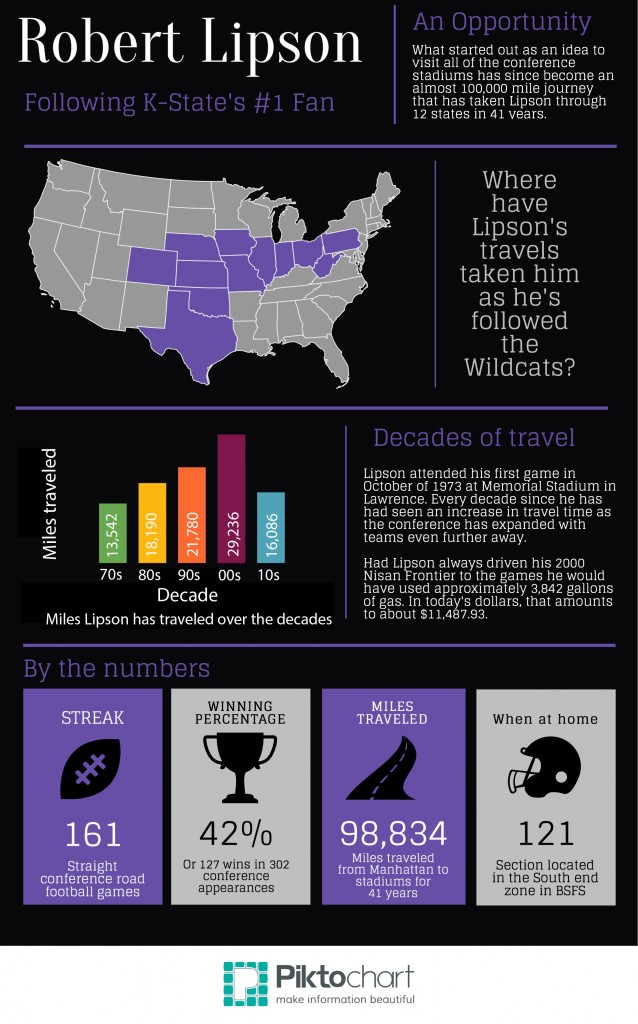 Traveling in his own car, Lipson often finds his own way to and from each road contest, while spending the night in his vehicle as well.

“I always leave in advance,” Lipson said. “I help (football equipment manager) Al (Cerbe) unload and set the equipment truck and set up the locker room. I help out on Fridays before most road games that I attend.”

The lone exception to Lipson’s plans comes when the Wildcats make their trip to Lawrence once every other year. The salesman conducts business in Lawrence and Topeka as he works his way to Memorial Stadium for the game.

For the die-hard K-State fan, being a part of the process that helps “set the table” for a road game is just as exciting as when he first stepped alongside the equipment staff.

“(They) pull in that great big equipment truck and I wave at them all excited,” Lipson said, imitating his wave with his famous foam finger in hand.

One unique story of Lipson’s travels began when he waved goodbye to Jack Hartman’s basketball team in 1981 as they headed to Columbia, Missouri and he was there when they arrived.

Conveniently enough, he ran into Hartman prior to the team’s departure for Manhattan after the game.

“I told him (Jack Hartman) that my car broke down and he asked me where my car was, which was in Manhattan,” Lipson said. “He said, ‘Get on, get on.’”

To say the program was in dark times prior to Snyder’s arrival is an understatement. Once William the Conqueror (as Lipson has personally labeled Snyder) took over, the direction of K-State football turned from the cellar to the heavens.

“What you have to remember (is) Kansas State football was in worse shape than the Kansas Jayhawks are right now and ever will be,” Lipson said. “Nobody thought he’d get it done. This is just another guy who’s going to come in here and go. This was a graveyard for coaching. He had such a gentle, easy-going and placid demeanor. He wasn’t one of these rough-tough mentalities and image of toughness that most coaches and players had.”

Lipson’s relationship with Snyder has been well documented and lead to a perspective of the program that few can compare with.

“I probably know more about what the inside of a college football program looks like and how it works better than anybody else who has never played, coached or worked in any way with a college football program,” Lipson said. “I did that (by) looking around and coming inside a lot, being with the teams, observing and noticing the difference between good coaches and bad coaches. I learned a lot of things and I’m still learning.”

Lipson shares his experiences as a super fan, talks about how he became started, and when he might end the streak. (Alyssa Lally | The Collegian)

As any dedicated fan would say, Lipson still dreams of what it would be like to see a national championship trophy in the Little Apple. Once it happens, it’ll be unlike anything he has seen over the last 41 years.

“All I ask for is to win the national championship just once in my lifetime, either in football or men’s basketball,” Lipson said. “Once I accomplish that, I’ll be satisfied. I don’t need to win another one. I’ll go to the games and I’ll feel like my destiny has been fulfilled. It’ll be much easier to do so.”

The process hasn’t always been smooth for Lipson. Working to become more financially stable, he contemplated his approach to his streak in 1993.

“I had to keep it going,” Lipson said of the strenuous times. “If I missed a road game, then I would have thrown away four decades of my life. I couldn’t do that.”

Lipson’s infamous streak will be stretched to 162 consecutive road conference games after Saturday’s 11 a.m. game at No. 11 Oklahoma. By the end of the year he will tally more than 100,000 miles, stemming from total ground covered in between trips from Manhattan to stadiums in other Big Eight/12 communities.

As the Wildcats sit at 4-1 on the season, obviously a full season’s evaluation has yet to be made. However, Lipson has his sights set on Jan. 12 when the national championship game will be played at AT&T Stadium in Arlington, Texas.

“The Wildcats will be in Jerry’s World on Jan. 12 playing a football game, so that when it actually happens I’ll have egg on my face and it’ll certainly taste delicious,” Lipson said. “I look forward to seeing you there.”