K-State is coming off of a clean sweep of TCU in Fort Worth, Texas on Wednesday, while Texas brings a resume that includes a sweep of Arizona, who gave the Wildcats one of their two losses earlier in the season.

First serve for K-State and Texas is at 7 p.m. on Saturday at Ahearn Fieldhouse.

Simply put, the Longhorns have dominated the series both in Austin and in Manhattan with K-State last getting a win against them in 2003.

So far, K-State has found success on the wings of great defense and steady, while not always efficient, offense.

K-State ranks first in the Big 12 in total blocks and has two players in the top five, senior middle blocker Natali Jones at first and sophomore middle blocker Katie Reininger at second.

Reininger was also recently named the Big 12 offensive player of the week for her games against TCU and Iowa State.

Arguably the greatest one-two punch in the Big 12 has started to throw more punches.

Freshman outside hitter Kylee Zumach has torn through the season, ranking third in the conference with 252 kills. Following close behind her, sophomore outside hitter Brooke Sassin continues to be a force to be reckoned with ranking eighth with 216 kills.

K-State middle blockers, Jones, Reininger and senior outside hitter Chelsea Keating have been able to put up some key points and at times have been dominant.

Keating’s serving has been on point so far this season with 24 total aces putting her at fourth best in the Big 12.

Libero Kersten Kober has also been a key asset for the Wildcats this season with her ability to sacrifice her body in attempt to keep plays alive. The sophomore ranks fourth in the conference with 267 digs on the season.

Sophomore setter Katie Brand, who was the defending Big 12 defensive player of the week, ranks third in the Big 12 in both total assists and assists per set with 780 and 11.14, respectively.

They are last in both total kills and kills per set, but they have also played the least amount of sets this season.

The Longhorns are led offensively by sophomore middle blocker Chiaka Ogbogu, who leads the Big 12 in hitting efficiency with .410 percent. Senior outside hitter Haley Eckerman leads the Longhorns in kills with 117.

Defensively, junior middle blocker Molly McCage leads her team and is ranked second in the Big 12 in blocks per set. Ogbogu is also ninth in the Big 12 with 53 blocks. 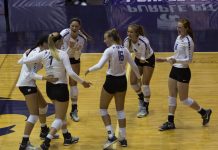