Every Royals fan has heard the haunting statistic “29 years of playoff futility.” The Kansas City team lost more than just games from 1986-2013; they lost an entire generation of fans. However, one playoff run is bringing them back and they’re staring in the face of the franchise’s first World Series appearance since 1985.

In 2003, the team was above average, but never really in the playoff race in September. In 2012, the organization made the team’s slogan “Our Time” before going on to lose 90 games, never showing a glimmer of hope.

Finally, in 2013, the team took off. They were propelled by pitching and defense—much like this season’s squad. They won 86 games and played meaningful baseball into the last week of the year. The competitive season began to restore interest in the Royals.

This season was different for Kansas City. Becoming competitive was no longer the goal and it was playoffs or bust for the organization. On Sept. 26 in Chicago, the dream finally became a reality when catcher Salvador Perez caught a popup and sent his team to the Wild Card game.

Had the Royals lost in the one-game playoff, many would have still called the season a success. With a four-run deficit in the eighth inning, it looked like that was exactly what they would do.

However, instead of losing, the team somehow battled back and won the game. Not only did they win, they also swept the following two series. In so many times before, the Royals would crumble when the pressure was on. This time, they have capitalized on the opportunity to seize the attention of their city.

The run has brought incredible amounts of fans to the Royals. K-State’s campus is now littered with blue shirts. Fans who have never seen this team play in the playoffs are living and dying with every pitch. The Royals are all the buzz on social media when games are being played.

The stirring of the city is finally being felt inside the stadium as well. Kauffman Stadium averaged 57 percent capacity for the regular season. Now, tickets are being sold for a minimum of well over $500 a piece on secondary markets.

The resurrection of the fan base did not happen over night. The man in charge of the overhaul, general manager Dayton Moore, was mocked for eight years about “The Process” and the way he chose to build his team.

Moore took over in 2006 and began attempting to change the tides of the woeful organization. His team suffered through losing season after losing season while he built the core foundation of this team through the draft and through trade.

His players grew up through the minor league system and have taken a lot of lumps in the majors. Moore said four years ago the team would compete in 2013 and 2014 for a world championship, and the players are finally making good on his promise. But don’t call Moore’s squad lucky or destined in this playoff run. Call them what they are: a team that is built to win in October.

The Royals do not hit a lot of home runs and really don’t have a dangerous offense, but what they amount to is a team that can battle the elements of postseason baseball. The starting pitching is good, they have incredible defense and one of the greatest bullpens of all time. That’s what wins in the postseason.

Austin Earl is a sophomore in fishing, wildlife and conservation biology. 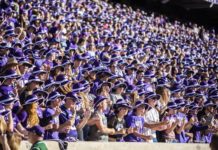