The K-State Students for Environmental Action and the Recycling Center are teaming up to discuss implementing a composting system within the K-State Student Union to take all compostable items and move them to the compost fields just north of Bill Snyder Family Stadium.

Doing this would eliminate an excessive amount of trash going to the closest landfill in Lawrence at the Pottawatomie County Landfill, and enable the university to use compostable waste to make clean, rich, dark soil which is excellent for gardening and farming. Utilizing the compost can be an efficient and cost effective way to cut down money for the university, according to Matt DeCapo, graduate in geography, chairman for the and former SEA president.

“The food waste from the Union when people eat their food just gets mixed in with all the other trash and just get shipped to the landfill near by Lawrence. It just doesn’t make economic sense,” DeCapo said.

Just last year the Recycle Center gathered 160,668 pounds of food waste to send to the compost saving the university $3,360 in just food waste alone and increased recycling by almost 47 percent according to numbers provided by Bill Spiegel, head of the Recycling Center at K-State. Spiegel said once the compost turns into rich soil then the agronomy farms can use it to grow their crops.

Using the soil from the compost would help cut down the need for water, fertilizer and pesticides, saving the school a handful of money while still growing quality food. The Union, recycling facility and SEA are all trying to implement a food waste system and put bins in the Union for food waste, much like recycling bins but where only food, paper and other compostable items would be accepted.

According to Matthew Pray, general manager of the Union food services, the system will most likely be implemented after the Union’s renovations, which are scheduled to start in 2015.

Spiegel said the only problem when talking about the composting right now would be educating students on what materials would actually go into the compost and the labor it brings upon the employees involved.

Food is compostable, as well as the paper plates which most of the food in the Union is served on, however, the eating utensils such as the plastic forks and spoons are not, Decapo said.

The labor involved with a bin system is also very intense, because the containers that contain the food waste weigh roughly 140 to 150 pounds which needs to be put on a truck and shipped out to the fields, according to Spiegel. When the renovations to the Union are done and the composting system is created, Spiegel said he will need more hands to help, which in turn will create more jobs for students.

DeCapo said that while composting can improve soil structure and increase nutrient content, it shouldn’t be left to just the university. He encourages others to start their own personal compost and said it really is easy to do. All a person needs is an area outdoors that’s about three feet long and three feet wide, take some soil, food waste and some of the leaves that are falling down at this time of year and mix it all together. Every two weeks or so go and mix the compost with a shovel to speed up the decomposition. A compost pile can turn into rich soil that is ideal for gardening in about three months. 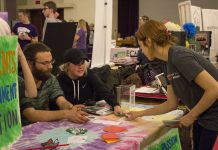