K-State senior quarterback Jake Waters is used to taking big hits by now in his career, as are his teammates and coaches when it comes to witnessing them.

However, after going down with an apparent shoulder injury in the third quarter against Oklahoma Saturday, head coach Bill Snyder questioned whether his star quarterback would be able to return.

Waters did just that, throwing for 225 yards and two touchdowns while gashing the Sooners on the ground for 51 yards and the eventual game-winning touchdown in a 31-30 upset over Oklahoma on the road in Norman.

“Jake Waters is one of the toughest guys I know,” junior cornerback Morgan Burns said Tuesday at K-State’s weekly press conference. “As a quarterback, it’s hard to run the ball and take some of the hits he took, he just kept persevering and kept on playing and really led the team really well.”

That gritty attitude, along with the bumps and bruises to show for it, has drawn many comparisons to former K-State quarterback and current assistant coach Collin Klein, Waters’ predecessor.

“When people think of Collin they always remember how bloody he was during games,” senior linebacker Jonathan Truman said. “Jake hasn’t had any iconic pictures of him bleeding anywhere yet, but he’s just as tough. He goes out there — prepares well — and just competes. It doesn’t matter who hits him or how hard they hit him, he’s going to line up back up and continue to play ball.”

He has quietly become the staple of the K-State offense ever since transferring from Iowa Western Community College a year ago. Last season, he beat out former K-State quarterback Daniel Sams for the starting role midway through the season and helped turn a downward spiral into an 8-5 finish a Buffalo Wild Wings Bowl victory.

Fast forward to this season, he’s thrown for more than 200 yards in all six games while eclipsing the 100-yard rushing mark twice. He’s yet to throw an interception in Big 12 play and hasn’t had an adjusted quarterback rating lower than 85 in nearly a month.

His leadership has also improved. Truman said it’s that “look in his eye.” Burns once called it a “fiery passion.” His coach? Commitment.

“As I have said often in here, I see a young guy that is committed to becoming a better player and works diligently at it,” Snyder said. “He studies the game, has made that improvement, has gained more and more confidence about his abilities in all the facets of the game. Over a period of time, it goes with the experience aspect of it. He has started 18 or 19 games for us, and if you are committed to that continued improvement, then that experience is very beneficial to you. He is a good player.”

Waters has certainly welcomed the success — hard work breeds it. He’s enjoyed the media attention, time with his teammates and, of course, winning ballgames. With every completed pass, every touchdown and every win, Waters believes he can do better and give more.

“I did alright. I made some good throws, but again I made some mistakes that I want back,” Waters said of his recent performance against Texas Tech. “I had a couple throws that I could have made and a couple reads that could have been better. I could have done a lot of things better.”

That’s the attitude that drives a mentally and physically tough Jake Waters. 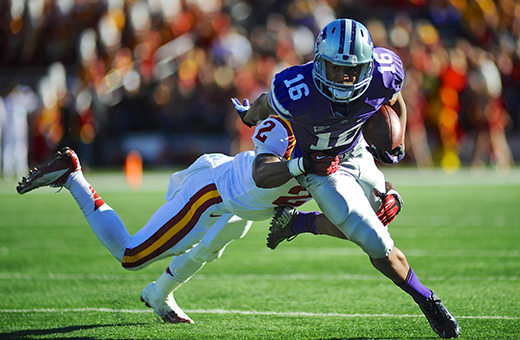