As the deadline for the K-State 2025 Plan inches closer, teaching and research faculty salaries at K-State still remain below the average of other research universities.

David Rintoul, associate director of biology and faculty senate president, said there are no easy answers in a state which has decreased funding for education.

“Honestly, with tuition raises over a number of years, which sound incredibly unpalatable to students and I don’t blame them, because they’re right, it’s not really their job, but that is a way you could get out of this,” Rintoul said.

Faced with continual decreased funding from the state, university administrators are relying heavily on tuition to pay for faculty salaries. President Kirk Schulz addressed the issue in a September interview on the K-State Radio Network.

Schulz said he had an answer for that question.

“Well, and my point back to our regents is that while they may not like to talk about tuition increases, we need to acknowledge that tuition’s gonna drive what the universities are able to do and I think it’s sticking your head in the sand to deny that,” Schulz said. 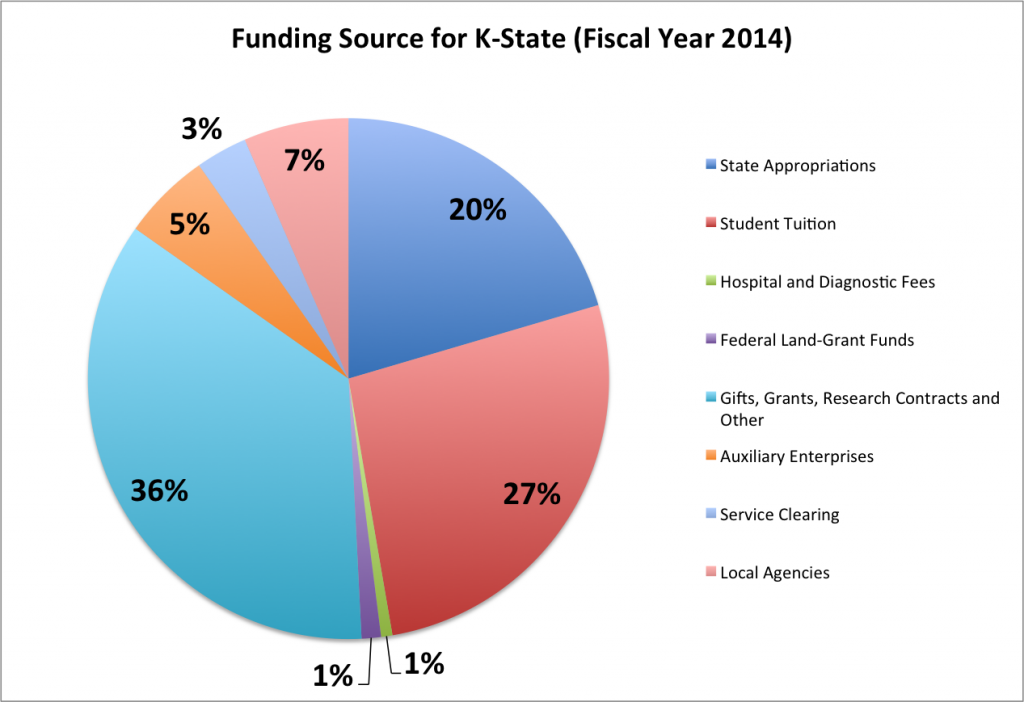 Part of the goal of the 2025 plan is to increase faculty salaries in order to attract and retain more teaching staff. As it stands currently, K-State ranks 42 out of 49 land-grant institutions in average faculty salaries, according to an October 2013 report by the K-State Office of Planning and Analysis.

Within the Big 12, K-State has consistently ranked last in average salaries going back to the 2009-10 school year, according to the same report. Rintoul said the report is not much of a surprise.

“We do this report every year and the same things come up every year,” Rintoul said. “It’s a long-term problem that doesn’t have a short-term fix.”

In 2012, K-State commissioned a task force to look at what needed to be done in order to bring faculty salaries in line with other top 50 research universities.

“We had a task force that laid out what it would take to get us up to median in those peer groups,” Rintoul said. “What it would take is probably five years of above average, say an average 5 percent merit raises, to get up to speed. What we got in the last go-round was 2 percent for three years. And as you probably understand, we just get further behind with that. It’s not a way to catch up.”

“We’re probably – depending on the guesstimate, for the size of the institution a couple hundred (faculty) light – 200 lower than we ought to be to be in that peer group,” Rintoul said.

While the engineering department is currently expanding, Rintoul said he questions if faculty will expand with it.

“I don’t know, but I’m suspicious that the expansion in engineering is just a space expansion and not faculty expansion,” Rintoul said. “That is, if they’re going to have all those new spaces to fill, who’s going to fill them? Not new people.”

Finding a balance between money, people

With the three-year plan expiring in 2015, the university will have to re-examine faculty salaries. Although there have been no discussions about it yet, Rintoul said tuition increases are a factor.

“The task force report that I talked about, they recommended those raises for a bunch of years,” Rintoul said. “They mapped out how that can be done with tuition increases, which right now is the only player on the table if the state isn’t going to play.”

Although the university received a record amount of philanthropy in the past year, Rintoul said those funds go to specific purposes, not directly to funding salaries.

“It’s very hard to fundraise for faculty salaries because people rightfully believe that paying your employees is something the state ought to do,” Rintoul said. “Students think, rightfully, that it’s not just their job to pay the faculty, that the citizens of the state of Kansas, who will benefit from the economic engine that universities are, should pay more than they’re paying.”

Peter Dorhout, dean of the College of Arts and Sciences, served on the 2012 task force that examined the university’s faculty salaries. He said that even when salaries are raised for new faculty, the university risks marginalizing current faculty who do not see the same bump up in pay.

“When I was hired as an assistant professor eons ago, I watched as new assistant professors who were being hired in were getting hired at a salary greater than my than current salary,” Dorhout said. “We try to be sensitive to that. We try to ensure that salary doesn’t get too inverted in a given department.”

Regarding the lack of state funding, Dorhout said it’s important for the university to maintain a balanced budget while still working towards the 2025 plan.

Dorhout said he is concerned about keeping faculty at the university if the state cuts continue.

“Sometimes, it’s not just about salary,” Dorhout said. “Salary’s important, but sometimes we have dual career members of the family and a spouse may or may not have a job in Manhattan or at K-State, and I try to help out. That may be more important to a faculty member than the overall salary situation, but salary is still important. I try to stay on top of any kind of situation that might pop up – this person is unhappy or this person may end up leaving – but I can’t solve all of these situations.” 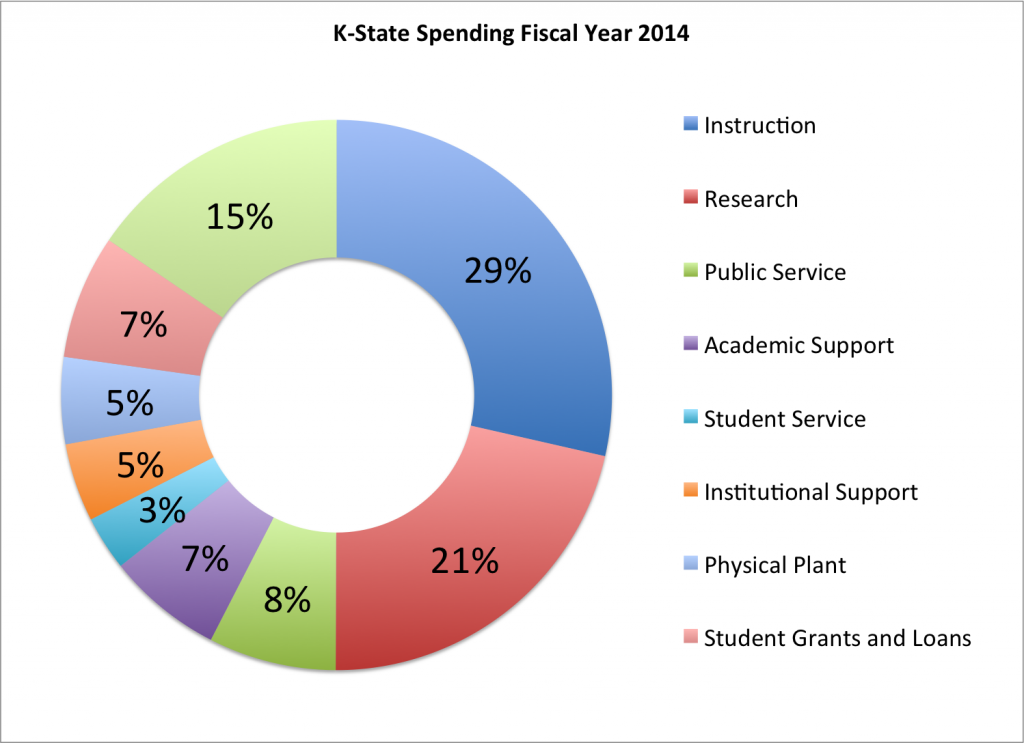 The College of Arts and Sciences employs 450 teaching faculty, the largest amount of any college on campus. The college now needs 80 new faculty members based on growing enrollment numbers, according to Dorhout.

Although the university has instituted a 2 percent merit raise over the last three years, Dorhout said his college is still at a deficit when it comes to faculty salaries.

“I would say the bulk of that [salary] deficit comes at the associate and full professor level, so it’s exactly the kind of people I worry about losing,” Dorhout said. “Folks who have been here, folks who have made their career and really developed their career at K-State. They’re going to feel probably the least appreciated as they recognize they are underpaid relative to peer institutions.”

As more students enroll at K-State, Dorhout said he does not want to make his college’s faculty take on extra classes to make up for the budget crunch.

“We’re really trying to not do that,” Dorhout said. “And at the same time, I have a larger number of students coming in to take classes at our college. The number of credit hours that we have been providing to all K-State students since I came a few years ago has just steadily increased. That is not coming with a lot of base money. I’ve gotten some temporary resources from the provost to help keep classes open or to add additional sections for the students who are coming in.”

The college has received some additional funding, but Dorhout said they are just temporary solutions.

“I have gotten some new resources to hire additional tenure-track faculty members, but the cuts that we have experienced really did put a damper on our ability to replace some folks who are retiring,” Dorhout said. “We’ve had to back fill a little bit with temporary instruction.” 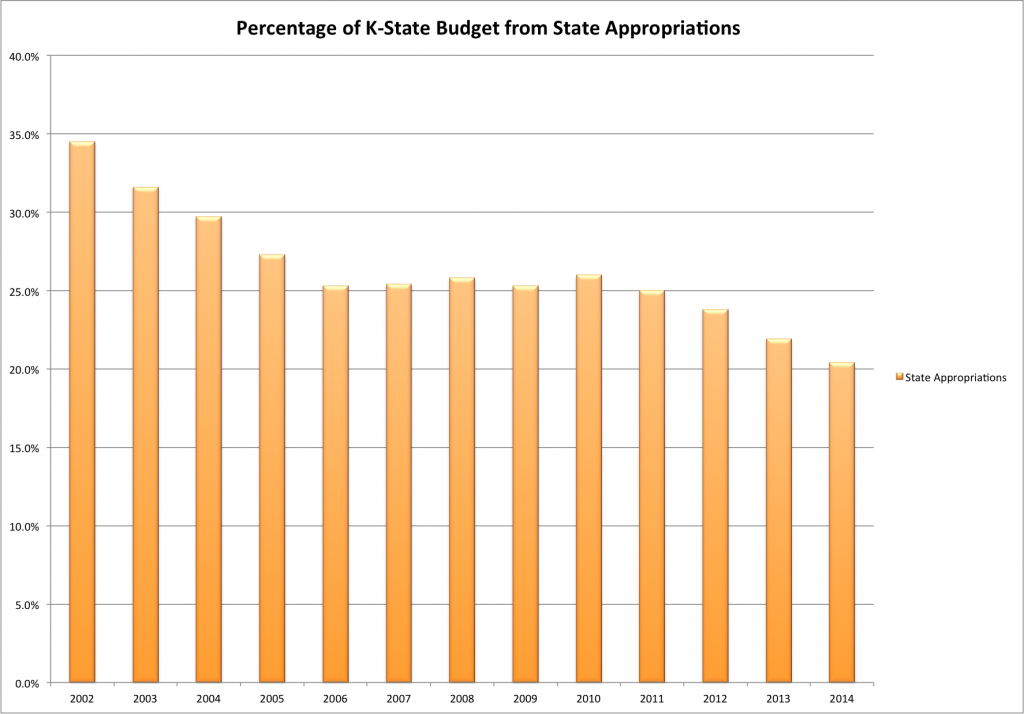 Regarding tuition, Dorhout said that it only makes up about 30 percent of the total cost for students.

“If you’re like me with my two daughters, they were getting ready to go to college,” he said. “We went through all of the financial aid documents, the FAFSA forms and all of the financial aid forms. We looked at what the cost of going to school was. In-state tuition, for them, was also 25 to 30 percent of the total cost. The rest of the cost is housing, books, food and costs of general living. Some of our arts & sciences faculty are turning to alternative sources for books to help students save money.”

According to Dorhout, the university needs to find alternate ways to keep college affordable.

“I think we have to look at keeping down the costs across the board,” Dorhout said. “Tuition is one thing we often focus on, but it’s only 30 percent of the total cost of coming to K-State. And yet that seems to be the only thing we ever talk about.”

The task of determining tuition increases falls upon the student led Tuition Strategies Committee. Any student may apply to be on the 10-student committee, which begins meeting in November. Members are appointed to the committee by the student body president and student senate speaker.

“Committee members will be chosen so that each college has representation,” Cody Kennedy, senior in education and mathematics and student body vice president, said.

The committee works with a number of administrators, including Provost and Senior Vice President April Mason.

“The committee looks at credit hour fee proposals from colleges across the campus,” Kennedy said. “After working with these proposals, we send our recommendation to the president (Schulz) and the provost. That is then presented to the board of regents.”

Although the committee makes its recommendation concerning the price of tuition, administrators can overturn it.

“The administration historically doesn’t go against our recommendation,” Kennedy said. “We work closely with them and they know we put so much time and effort into it.”

Keeping down costs is a big concern for Rintoul. He said the success of students often depends on money.

“We’re still pretty low, if you look regionally, tuition here is actually lower than a lot of places,” Rintoul said. “Tuition plus fees are lower than a lot of places. But at the same time, this is not a rich state and people have legitimate concerns about getting in school and staying in school more than anything else. The biggest single factor in whether or not you stay in school and graduate is money. It’s not your SAT scores. It’s not your high school. It’s not what kind of grades you get here. It’s, ‘Can you afford to stay in school?’ SAT scores are great, but if you can’t afford it, it doesn’t matter.”

The university has initiated a few cost saving measures, such as removing textbook purchase requirements for certain classes and using free online textbooks developed by faculty, according to Rintoul.

“This place is doing a lot of stuff to try to keep costs down,” Rintoul said. “One of the things we’re doing in this (biology) department and other departments as well is what we call an open alternative textbook initiative. It’s something that saves students, if it’s a used book, $60, and if it’s a new book, $225. We’re doing our part, I think, to make sure that people don’t have that economic disincentive.”

Rintoul said the university needs to find other ways to lower costs for students while still investing in education.

“I would just hope that there’s some inkling of how hard you have to work to get here, how hard you have to work to stay here and that it’s important to think of the salaries of not just faculty but high school instructors as, well, as investments,” Rintoul said. “You’re investing in your future and you want to get the most for your investment. That investment means that you want to get the best people in the classroom. The people I know at this place who have been here a while, are truly invested in the future of the students. And we think we deserve to be compensated fairly.”