After getting off to a tough start in set one, the K-State volleyball team rebounded by winning three of the next four and knocked off West Virginia for the Wildcat’s seventh-straight win in true road matches.

“We did not have the sense of urgency to play clean, to keep the errors low and manage a bad situation,” head coach Suzie Fritz said. “What was getting away from us was within our control, and we knew that if we could start to manage situations better, we could work our way back into the match and get better as we went.”

The Wildcats (19-3, 6-2) found themselves down and out early after dropping set one.

K-State controlled the set one throughout the majority of the duration taking a 23-19 lead. However, the Mountaineers (13-9, 3-5) came storming back and took set one on a K-State error at 27-29.

The script was flipped for set two as the Wildcats played the part of the come-from-behind team.

Down by three late in the second set, K-State strung together a 5-0 run that secured the set for the Wildcats 25-23.

Set three was all K-State as they led by as many as nine points. The Wildcats were in cruise control to a set three victory, but they had to fend off a late rally that closed the margin to as little as four points at 25-21.

Set four was close too, as they come with 11 total ties. The final tie was at 23 points, but the Mountaineers slipped away on a K-State error and a kill that ended the set at 23-25 and knotted the match up at 2-2.

In need of a final set victory, K-State was in control through the majority of the fifth set. West Virginia pulled within two near the end, but K-State’s senior middle blocker Natali Jones was able to take the set (15-12) and the match on a kill.

The Wildcats are now 3-1 this season on five-set matches.

Freshman outside hitter Kylee Zumach led the charge offensively for the Wildcats with 24 kills, which was one away from her career high. She was followed by sophomore middle blocker Katie Reininger’s 17 kills and sophomore outside hitter Brooke Sassin’s 15 total for the day. Jones also had double-digit kills with 12.

Defensively, the Wildcats did not play their best game. They allowed two different Mountaineers to have over 20 kills and the team hit a respectable .264 on the night.

“That’s a good team – (West Virginia) hit .300 in first-swing (offense),” Fritz said. “We felt we had a good defensive plan going into it, but honestly, we were better offensively than defensively. That is not our trend. I like what our offense did, though, so maybe now we can start to get more balance and get our offense and defense working more in sync.” 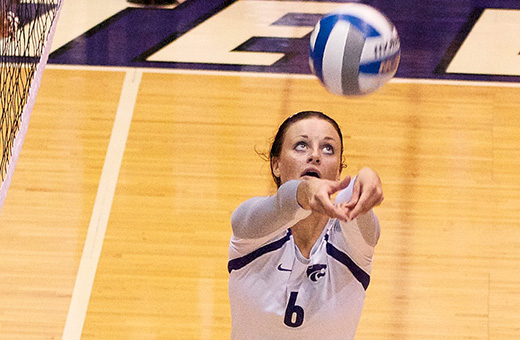 Powercat Profile: Katie Brand sets up for her sophomore season