Some big changes are coming to campus courtesy of the K-State 2025 Plan. One of which is the closure of roads leading into campus, making them accessible only to pedestrian foot traffic and cyclists.

Right now these plans are a work in progress, but the basic idea is that driving to class is not going to be as easy in the future.

“The plan is to make the interior of campus car free and make it friendlier for students walking and biking,” Darwin Abbott, director of Parking Services, said. “The master plan still has to find a way to allow for emergency services, firefighters and ambulances, as well as maintenance vehicles to have access.”

The plans and implementation have not been finalized.

“Everything is still changing,” Abbott said. “As the university does more research into this, the plan changes or has to be made to fit what they learn. The parking garage is still going to have the same number of entrances, what is being discussed right now is the closing of one of the exits and how much of the roads that access the garage stay open.”

If the current model was approved, all cars exiting the Kansas State University Parking Garage would be making a left onto 17th Street. Drivers couldn’t go right, because the north end of 17th Street would be blocked off and turned into a loop. The other one-lane exit on Mid-Campus Drive would be closed as well as its connection to Vattier Street.

I understand that the plan for road closures is a way to solve campus problems. Some roads are hardly useful because they are right next to buildings and traffic comes to a stop when a class lets out. Many of these roads are narrow, one-way streets and that lead to more traffic headaches.

However, I think the problem here is that too many roads are being closed.

Cayde Sterling, senior in education, said that even right now with all the entrances and exits open, parking at the garage is a mess.

“I work in the (K-State Student) Union,” Sterling said. “And because of how bad it is right now, I park down the street and walk into work. If they make it so it’s so jam-packed, worse than it is now and have all that traffic on one road, it’ll be chaos. People get dropped off there, either by friends or by the bus. It just sounds like it’s going to be stressful for everyone trying to get in or get going.”

If using the parking garage right now is bad, the new plan should not make the drive worse. I think drivers would feel better if those roads stay open just far enough that going to and from the parking garage can be made more manageable. Closing off the interior parking spaces is going to put an even bigger premium on spaces on the south end of campus, especially in the parking garage. If 17th Street stayed open and Mid-Campus Drive stayed connected to Vattier Street, that would be the best thing to do to help the situation.

Speaking of Vattier Street, that leads to another problem down the road with this plan. McCain Auditorium sits on near the southeast corner of campus. These road closings affect how traffic gets in and out of the area for events in the McCain Performance Series.

“The only time that would be really be bad is when the tour buses come through,” Nolan Groff, senior in chemical engineering, said. “When they come through with the kids from the elementary schools they come through there, using that exact stretch of road.”

So while an entry and an exit to the building are being closed, the main ones remain open. Or will they?

“It could come down with the closing of all the other interior parking lots on campus, and with the construction of the new business college that parking lot next to McCain and the Beach Museum could be closed,” Abbott said. “The university has ideas on what they want to do and we have expressed them to our contractors who are looking at how to implement them. At this time, we are all waiting on those reports.”

So while Parking Services awaits a final decision, I think K-Staters need to be looking at the big picture too. Though we all may just graduate before the 2025 plan is completed, the decisions (and construction) will be implemented while we are here. 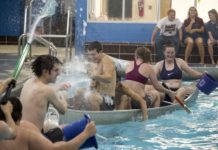 The Natatorium expected to close in the next three years 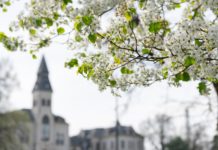 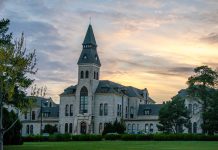