Consistency is the key for the senior signal-caller for the Mountaineers. Trickett resembles a custom-made quarterback that you would make on a video game due to the incredible numbers he’s posting this season. He has only thrown for under, yes under, 300 yards once and that was last week against Oklahoma State.

While he may not have the speed and mobility of other quarterbacks in the league, his arm is what separates him from the rest of the list. Lucky for Trickett, he has a big-play specialist in Kevin White at wide receiver. Trickett makes this offense dangerous on every play, which will be key as the season winds down.

If Trickett is how you make a pure-passing quarterback on a video game, Boykin is what would happen if you slid all of the skills to 99. He is just that good. The junior has deceptive speed and footwork for a quarterback and he is the leading Big 12 quarterback in rushing yards with 374. He also leads the conference in total offense, averaging 382.9 yards per game.

Boykin, who has constantly been overlooked in his career, is making the conference take notice of his skill, throwing for 433 yards and seven touchdowns against Texas Tech. He has also broken the school record for touchdowns and points scored in a game. If he continues at this pace, the Horned Frogs are on pace for a potential playoff berth and maybe a chance to bring a Heisman to Fort Worth, Texas.

This is the second week in a row where Petty has slipped in the rankings. He looked unstoppable at the beginning of the season, but has shown signs of inconsistency through the last several games. The problem started with his back injury and the pain that it caused him afterwards.

Petty has the issue of not being able to sustain his performances from week to week. He can throw for over 500 yards one week, only to answer with 200 yards the next. There certainly is no lack of weapons due to the presence of KD Cannon, who appears to be the front-runner for Big 12 rookie of the year. Along with Cannon, Petty needs to work closer with sophomore running back Shock Linwood.

While Waters’ health may raise a question or two, it shouldn’t be too concerning when realizing that nearly every player on the field is dealing with different ailments at this point of the season. Waters still has an ample amount of zoom to the ball when he throws it and he is making the right passes as he is yet to throw a Big 12 interception.

However, he does have the tendency to try to force the ball into spaces that he shouldn’t. Some balls are thrown right to defenders and he probably should have more interceptions than he currently does, but he does have top notch wide receivers who can play some keep away.

In shutting down White, Oklahoma State did something that no one has been able to do this season. White looked nearly unstoppable going into the game, having over 100 yards in every game and 1,047 total yards and eight touchdowns. Against the Cowboys, he could only reel in three receptions for 27 yards, but extended his touchdown streak to six games. 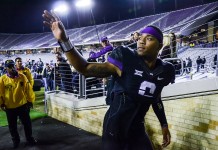 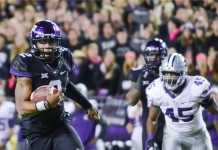 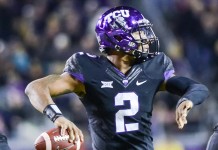