For three years, Zombie Toxin Haunted House in Junction City has been providing its customers with a scare for Halloween. Though this time of the year is always busy for the attraction, this Halloween is different for Zombie Toxin.

According to Damien Zimmerman, art director for Zombie Toxin, this year’s production is projected to be “much bigger than previous years.”

This expectation is partially due to Zimmerman’s newfound fame. Zimmerman is currently a contestant on the seventh season of Syfy’s competition show “Face Off.”

This completely self-taught, Kansas native competes in Los Angeles against fellow prosthetic make-up artists from across the country. According to the Syfy website, Zimmerman learned these make-up talents through watching videos.

The contestants must display their creativity and skill in constructing quality characters within the specific requirements of each task. Each contestant hopes to be the last one standing to receive prizes, including $100,000.

Zombie Toxin is underway with potentially their busiest Halloween yet, according to Rob Blanken of Junction City.

This year, Zimmerman will be displaying his nationally recognized talents for Junction City visitors. He will be giving make-up demonstrations outside Zombie Toxin, a way of entertaining the customers while they wait in line.

(Zimmerman is) a very kind and caring person, and also very determined and adamant about his efforts of his labor,” Blanken said. “He wants them to be perfect.”

This Halloween season, Zimmerman encourages people to check out what Zombie Toxin has to offer. He denounces the reputation of the “rinky dink” haunted houses typically associated with small towns. Zimmerman promises that Zombie Toxin prides itself in quality attractions, which he described as Disney World worthy.

Sara Whalen, instructor of communication studies and avid Halloween enthusiast, visited Zombie Toxin this October for the third year in a row. She described her time there as “a wonderful experience overall, exciting from the start.”

“The amount of effort really shows,” Whalen said. “The scenery and the sets are like no other haunted house I’ve ever been in.”

The haunted house also sets itself apart from others because of its workers. Many of the members of the staff are not the usual haunted house workers. The volunteer staff comes from Fort Riley. Zombie Toxin partners with the Better Opportunities for Single Soldiers, or BOSS, to promote interaction between the soldiers of Fort Riley and the surrounding communities. Whalen said she noticed the unique volunteers and how involved they were.

“It seems like the actors he hires too really love what they’re doing and they give it 110 percent every time,” Whalen said.

The soldiers work to put on the Zombie Toxin and in turn, the business helps support Fort Riley and its soldiers.

Zombie Toxin takes customers on an tour through the home of Dr. Von Monschture. According to legend, the doctor’s goal was to discover the secret to immortality. The house is full of the doctor’s experiments, equipment and victims. 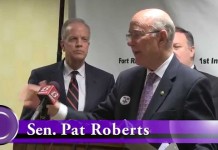