The 2014 election for the Kansas House of Representatives could cause a shift in the political pool. While 50 candidates will run unopposed, there are 75 other races that will see competition. Of those 75, there are nine that the incumbent only won the last election by a margin of 5 percent or less.

In these highly competitive races, how the incumbent voted on some issues can be important for students.

Rep. Melissa Rooker, one of the 14 women Republicans in the House, only won her last election by 2 percent and is challenged this election by Democratic candidate Jennifer Robinson. Robinson’s campaign is heavily focused on funding for education and supporting teachers. Rooker, of District 25 located in Johnson County, was in the House when the controversial education-funding bill (House Bill 2506) was voted on. The bill, which followed the Kansas Supreme Court’s order that the state provide more funding for K-12 education, received a “nay” vote from Rooker.

Another important part of Robinson’s campaign is gender equality, races and all people. Rooker opposed the Religious Freedom Act (House Bill 2453), which allows people to refuse service related to a relationship if it goes against their religious beliefs, when it came through the House and passed by a 72-49 vote.

Rep. Ken Corbet, District 54 of Topeka, was another representative who barely won his last election. In 2012, he challenged then-incumbent Ann Mah by just .2 percent.

Mah, a Democrat, is back to attempt to reclaim her seat. While in office, Mah championed House Bill 5009, which was a constitutional amendment toward equal rights and banning discrimination based on gender. Since he was elected in 2012, Corbet voted to support the Religious Freedom Act. Corbet’s campaign focuses helping the Kansas economy grow.

A former military man, republican incumbent Rep. John Bradford, is also in a tight race. Winning his last election by only 2 percent, the District 40 of Lansing and Leavenworth, Bradford faces the same opponent, democrat Linda Johnson. Serving on the education committee, Bradford voted in favor of the education-funding bill. His campaign is heavily focused on promoting small government, as well as being pro-life and in support of the second amendment. Johnson is also heavily in favor of education and stated that she thinks it’s vital that Kansas keep a focus on balancing the budget and restoring its fiscal responsibility.

“It gave an increase in funding to K-12 schools of $130 million,” Bradford said. “It took the state mandate of tenure and gave it back to the districts. State districts always want more local control and we gave it to them.”

“I have two years of experience, I went up there with no particular agenda,” Bradford said. “I went to Topeka open-minded and I successfully headed and got three bills passed and signed by the Governor.”

For democrat Rep. Ed Trimmer, who won his last election by only .7 percent, is competing with Larry Alley for the representation of District 79, located in southern Kansas. A former teacher, Trimmer served on the education committee and voted against the education-funding bill. Trimmer also voted against the Religious Freedom Act.

Alley, who has challenged Trimmer for the past two election seasons, stated that he believes in an education that also provides a focus on life skills in addition to math and sciences to help prepare students for both college and careers.

“I supported the funding part of (the education-funding bill) and the equalization of it,” Trimmer said of his decision to vote down the bill. “At the end, we kept getting different versions from the conference committee.”

The representative credits the addition of a $10 million private school tax credit for corporations, the elimination of due process for teachers and allowing non-certified teachers to teach math, science and technology courses as his reasons for voting against the bill. Trimmer calls himself “truly partisan,” crediting being a minority party member for making him have to work with both. However, Trimmer said he likes to work together with other parties, too. 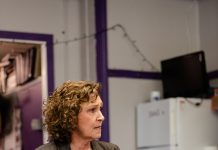 Q&A: Representative Carlin discusses being a Democrat in Kansas, importance of education

OPINION: What it’s like to debate behind the microphone 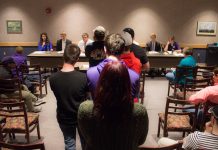