Home News Local News Students share opinions on why voting matters, who to vote for

It is that time of year again. You can’t drive down the street without seeing the signs, or turn on the radio without hearing the commercials.

It is time for elections.

Living in a college town, it can be easy to forget that other things are happening outside of Manhattan. According to the Center for Information and Research on Civic Learning and Engagement, only 20.5 percent of the eligible Kansas voters ages 18-29 voted in the 2010 midterm elections.

Joe Tinker, junior in psychology has been a registered voter in the state of Kansas for a little over two years.

“I registered to vote because it is crucial that we are all active participants in our local and national government,” Tinker said. “It is important we choose qualified and trustworthy individuals to represent us.”

Although some of the issues being voted on may not directly affect the students in our community, Jessica Van Ranken, sophomore in political science and business, said she finds it important that voters of all ages cast their vote.

“Voting at any age is incredibly important because any issue that doesn’t directly affect me surely affects someone who deserves to be represented,” Van Ranken said.

Many students register themselves to vote for different reasons. Some choose to simply because it is considered a perk of turning 18. Others, such as Carl Bowden, senior in wildlife conservation biology, want their opinion to matter.

“I registered myself to vote because I know that every voice matters,” Bowden said. “Being an active voter gives you the right to state your opinion and have a voice in our government.”

But political advertising can make it hard to tell who the better candidate actually is.

“While it is very easy to get pulled into the sleazy ‘he said, she said’ games, I try to look past the public stunts and critically analyze each candidate using firsthand and unbiased accounts of their character and political ideologies,” Tinker said.

A major part of becoming a registered voter is developing your own political opinions. Though these can be touchy subjects, students should be exploring and developing their viewpoints now.

“I like to look at how candidates have voted in the past on issues about which I care, and stay updated on their plans to serve citizens if elected,” Van Ranken said. “I try to read the news from a variety of sources so I’m not overly swayed by the bias of one side.”

Although politics may not be the most interesting topic to every college student, it can be beneficial to learn about the people who will be representing and making decisions for you.

“Educating ourselves on critical issues and voting are two simple yet powerful ways to engage in public decision making,” Tinker said. “By becoming socially conscious citizens, we can affect real change and create a better society for years to come.” 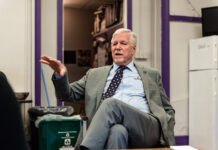