On 16 different occasions, senior linebacker Jonathan Truman stared down TCU quarterback Trevone Boykin on third down. No matter the down and distance, the junior signal-caller made it incredibly difficult for the K-State defense to get off the field.

Whether it was with his arms or his legs, Boykin orchestrated a near-perfect offense against arguably one of the nation’s best rush defenses. The TCU junior ran for 127 yards on 17 carries while also throwing 23-for-24 and 219 passing yards.

Overall, he tallied three touchdowns on the ground and one through the air.

“He’s a great quarterback and he can hurt you through the air and on the ground,” Truman said. “We saw that today. If we did a good job on the back end covering, he could still hurt us with his feet on the scramble. We just have to do a better job at containing that.”

Even with a previous matchup against a soon-to-be former top-five team in Auburn, senior wide receiver Curry Sexton offered no doubt when thinking if the Horned Frogs were the best team they had faced this season.

“Absolutely,” Sexton answered quickly. “No doubt about it, that’s the best football team that we’ve played. TCU has a really good chance to go and do some big things and I really hope they do it for the Big 12. They’re a good team and they deserve it.”

The Horned Frogs took it to Truman and company by torching the unit for 352 rushing yards on 48 carries. Even with his season-best performance, Boykin wasn’t the standout of head coach Gary Patterson’s backfield.

Aaron Green, who stepped in for the injured B.J. Catalon on Saturday night, had a season-best 176 rushing yards that was highlighted by a 65-yard touchdown run in the third quarter.

“I don’t know if it’s media or how it plays out, but we didn’t talk to the players about it because we watched both of them,” Snyder said of his team’s approach to the two-headed monster. “One is as good as the other. They’re stacked up in there.”

Starting safety Dylan Schellenberg wasn’t seeing TCU’s offense for the first time as he had to step in for an injured Ty Zimmerman late last season.

“They’ve definitely taken it to the next level,” Schellenberg said. “They built on last year and the weapons that they have. Boykin did a good job for them and he’s really stepped into that quarterback role (well).”

Although it allowed a modest 102 rushing yards in the first half, K-State’s rushing defense hadn’t reached its breaking point.

However, Boykin put a near dagger in the hearts of the Wildcats with an impressive touchdown drive to open the second half and push his team’s lead to 17 points.

Despite the 21-point defeat, senior linebacker Dakorey Johnson said where the loss column stands is what he and his teammates need to focus on in the upcoming practice week.

“It’s very important,” Johnson said. “We will bounce back. At the end of the day, TCU is a good football team. They had a really good night, but we’ll bounce back. We’ve worked too hard not to.” 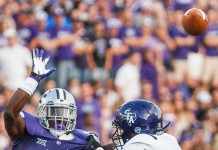 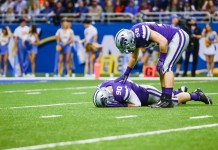