The Wildcats had easily their worst night offensively of the year. The run game has been a weakness for this team on a weekly basis, however, never has that weakness been so exposed as it was Saturday night in Fort Worth, Texas.

K-State put forth a measly 34 yards on 19 carries with zero touchdowns. That dilapidated stat forced head coach Bill Snyder to abandon the run completely, which made what at times this season was a very balanced offense, one dimensional.

Let’s be perfectly clear, the only reason K-State did not receive an “F” for their 20-point performance is Tyler Lockett.

The senior receiver battled an extremely talented TCU secondary by putting up 196 yards on 11 catches and a touchdown, Lockett, and at times, quarterback Jake Waters, were the only bright spots on the very dark day for K-State offense.

Junior quarterback Trevone Boykin and TCU’s offense came as advertised. Whether the attack was by air or ground, the Horned Frogs were exactly as advertised.

Boykin put on a Heisman-caliber show, throwing for 219 yards and a touchdown and rushing for 127 yards and three touchdowns.

Assisting Boykin in their offensive assault was junior running back Aaron Green, who up until today’s game was a backup to junior running back B.J. Catalon. Green had 176 yards with one touchdown, with his longest run amounting to a 65-yard back-breaking score. That run extended the Horned Frogs lead to three scores which put the game all but out of reach for K-State.

K-State went into Saturday night’s game ranked ninth in the country in rush defense. In their past several games, the Wildcat front seven looked darn near unstoppable against the run.

This, was not K-State’s defense. Not even close. The allowed a combined total of 334 yards on the ground and 219 yards through the air. The defense forced zero turnovers and put almost zero pressure on Trevone Boykin, who was never sacked once during the game.

It’s really hard to be picky with a performance as dominant as the one TCU’s defense put up Saturday night. They were extremely successful at making K-State one dimensional.

The second leading rusher for this K-State team was sophomore backup quarterback Joe Hubener and he had 12 yards. That tells anyone all they need to know about how TCU handled the run against the Wildcats.

What drops their grade is that they let Lockett have his way throughout the duration of the game. He took an almost perfect night for the Horned Frogs’ defense and gave it a minor black eye.

K-State’s grade is low not for what they did or didn’t do, but for a squandered opportunity.

K-State did well in kick returns when they were able to return them, setting up their offense with fairly good field position.

What ruined the special teams performance and perhaps the entire game was when Tyler Lockett’s kickoff return was taken to the house and soon eliminated by a crucial holding penalty.

Nothing super special here for the Horned Frogs. Junior kicker Jaden Oberkrom made every kick, including a 26-yard field goal.

They had several solid kick returns that gave their offense great field position, but no points were earned off of them.

The mark is now a K-State record as he passed his father Kevin Lockett for the top spot in the school’s history of total receiving yards.

This mark puts him in the top 10 of overall yardage gained in a single season by a K-State player.

13: Number of times Tyler Lockett has had 100-yard receiving games

31: The number of career touchdown passes thrown by Jake Waters, which puts him sixth all-time at K-State.

PREVIEW: Men’s basketball heads to Fort Worth on Saturday for showdown with TCU 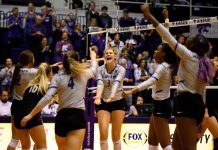