Two K-State professors will receive a plaque and $10,000, to be used for continued research, as part of the University of Kansas’ Research Achievement Awards at a ceremony on Dec. 9, according to K-State Today.

Susan Brown, university distinguished professor of biology, will receive the Olin Petefish Award in Basic Sciences for helping create a system for genetic studies of the red flour beetle.

Frank White, professor of plant pathology, will receive the Irvin Youngberg Award for Applied Sciences. Part of his work has uncovered plant genes that affect how susceptible or resistant they are to plant diseases, according to the release.

The U.S. Supreme Court issued a two-paragraph order Wednesday, refusing to overturn a lower-court’s ruling that allowed same-sex couples in Kansas to marry.

Previously, the 10th Circuit U.S. Court of Appeals had ruled that similar bans on gay marriage in Utah and Oklahoma were unconstitutional, according to the Kansas City Star.

On Nov. 4, Kansas Attorney General Derek Schmidt filed a request seeking to have the entire 10th Circuit Court hear the case (Marie v. Moser), rather than just a panel of three judges, which happened in the both the Oklahoma case and the Utah case, according to a press release by Schmidt.

According to the Wichita Eagle, the quake happened at approximately 3:40 p.m. It was felt across Kansas, including Hays and Topeka, and into Oklahoma.

This was the second strongest earthquake in Kansas history. The largest was a 5.1 magnitude quake that shook Manhattan in 1867, according to the Eagle. 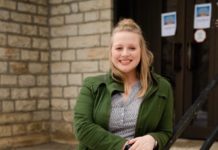