It’s said you don’t get a second first impression. But with a 98-69 win over Southern Utah, the 2014-15 Wildcat basketball team doesn’t need one.

With the best offensive performance since Frank Martin’s 2010 squad put up 100 on North Florida 2010, K-State raced by this Thunderbirds team that last year registered just two wins on the season.

But, it was just last year that another Big Sky conference team came into Bramlage Coliseum and played spoiler to a K-State team.

K-State, defending a Big 12 title, opened their season against Northern Colorado and the Bears held K-State to a mere 33% from the field and beat the Wildcats 60-58.

“It felt good,” sophomore guard Nigel Johnson said. “Especially because of last year we played a similar team in the same conference and we came up short. and everybody thought we were going to win. So just to come out with the win tonight, it felt good.”

Johnson, who had 15 points on the night, led the scoring renaissance for the Wildcats who set new highs for the Bruce Weber-era in field goal percentage, three point percentage and points.

It’s a pretty stark difference considering that last years K-State team did not even reach the 60 point mark.

Sophomore guard Marcus Foster talked before the game about the ramifications of losing a season opener.

“People forget about you when you lose that opening game,” Foster said. “It takes a lot to get the fans back and the media’s respect. You just have to start the season off with a tone of high expectations. We had the pieces to win that game last year, but this year we have the pieces to overcome adversity and win the game.”

For last years K-State team, life post-Northern Colorado did not get any better before it got worse.

Offensive woes continued and followed them even out of the country as they dropped two of three games in their trip to Puerto Rico.

People didn’t know what to do with that team, some thought that with how K-State was playing, a NIT berth would be a successful salvage of a offense the no direction.

The Wildcats had the good fortune of getting their season jumpstarted on the backs of Marshall Henderson and Ole Miss to put together a season that ended up being not too shabby.

These Wildcats are starting from a much different place. Sure, Southern Utah aren’t world beaters and it’s doubtful that they’ll see any kind of postseason play.

But, that’s not really the point.

K-State has put themselves in the position where, as of now, game one, playing

catch up is not needed.

Sure, a UMKC team that toppled the once mighty Missouri Tigers comes to town on Mon. and in less than two week they head to Maui where the likes of Purdue, Arizona and San Diego State loom, but thats then.

Tonight, K-State gets to go to bed knowing that they took care of business and, unlike last year, did that from square one.

Tomorrow can always wait, especially if you just went 1-0. 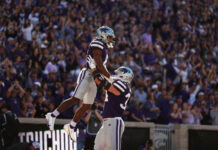