UMKC enters 1-0, as well, after upsetting Missouri 69-61 on its home floor on Friday. UMKC jumped out to an early 21-11 lead and didn’t look back from there in the program’s first win over a Division I power-conference opponent since beating K-State by 41 points at Municipal Auditorium in Kansas City, Missouri in December 2003.

“UMKC upset Missouri and we have them coming up,” Weber said after Friday’s win over Southern Utah. “It is a totally different style. We have to be ready for that, then it will continue getting harder.”

“I’m not going to sit here and fool anybody,” UMKC head coach Kareem Richardson told the media after Friday’s win over Missouri. “It’s big for our program. But it can’t be the biggest one for us this year. We have to build on it and look forward to the next challenge.”

K-State is 9-0 against UMKC in Bramlage Coliseum and has only lost to the Kangaroos once overall. The most recent meeting between the two teams came in December 2012 in a 52-44 win for the Wildcats. Senior forward Thomas Gipson, then a sophomore, scored 13 points and pulled down six rebounds in Weber’s 12th game as K-State’s head coach.

Coming off of Friday night’s historic performance, K-State will look to carry forward its newfound offense.

Weber confirmed Friday night that sophomore forward Wesley Iwundu and freshman forward Malek Harris could see the court Monday after missing the season opener due to injury. However, Weber said it is more likely that only one of the two will be available. Senior forward Nino Williams, who also missed Friday’s opener due to injury, will likely return to action on Friday against Long Beach State.

“Wesley felt better, he went through a workout,” Weber said. “Malek is a little better, we just need to get him in a couple days of practice before we feel that he can go. Nino probably will be next Friday.” 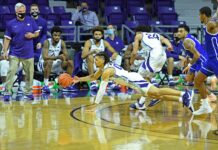 Column: Things are not coming together fast enough for K-State