In need of a break from a three-match losing streak, K-State answered in a big way against Baylor.

K-State came out flat in sets one (22-25) and two (16-25), as they saw Baylor race out to a 2-0 lead in the match. During the intermission, head coach Suzie Fritz questioned her teams character and tried to find answers to mount a comeback.

“We talked (during the intermission), saying this is not who we are,” Fritz said. “We asked them, ‘What are we going to do to work our way back into it?’ We made a strong suggestion of coming out on the offensive and firing on all cylinders. Let’s make sure, in the end, we don’t get outworked.”

After that, it was all K-State.

In the third set (25-18), the Wildcats came out with a better defensive approach and Baylor was held to .119 percent from the floor after hitting .393 in the second set.

Things did not improve for the Bears in the fourth set (25-19), as their hitting percentage dropped to a dismal .098 percent.

The Wildcats led through the entirety of set four and after taking a 15-11 lead, they never allowed Baylor to come with four.

Set five (15-9) was close for just the beginning. After knotting the score at 5-5, K-State started to pull away and scored four of the last five points to take the set and complete the comeback.

The liberos had a strong day for the Wildcats as sophomore Sheridan Zarda lead all players with 28 digs.

“I was exceptionally proud of the way (Gardner) came in and contributed, in a new role,” Fritz said. “I was also proud of (senior libero) Gina (Madonia) and Sheridan, who stepped into the (libero) role for us. Those three did a tremendous job of handling balls and keeping us in it.”

ANALYSIS: Women’s basketball gets a taste of their own medicine in loss to Baylor 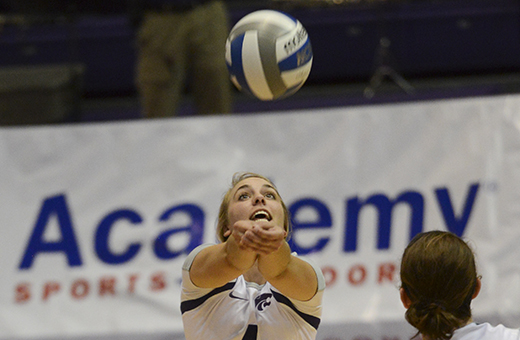 Wildcats chase down Jackrabbits on volleyball court for eighth-straight win