The memorial service of Marianna Kistler Beach was held Sunday at the K-State Alumni Center.

Kistler Beach, 94, was a supporter of fine arts and special needs programs, among many other endeavors, and has been recognized by organizations such as K-State, the University of Kansas, Fort Hays State University, Topeka Daily Capital and People to People, among others.

Terry Edwards, daughter of Kistler Beach, said at the beginning of the service that even though her mother had spent the most recent part of her life in Lawrence and had lived in Hays for over 60 years prior, Manhattan held a special place in her heart since she graduated from Manhattan High School and K-State.

David Ambler, vice-chancellor for student affairs emeritus at the University of Kansas, delivered Kistler Beach’s tribute. Ambler spoke of Kistler Beach’s passions for poetry, journalism and theater, as well as her dedication to service of others.

“Dedication was Marianna’s middle name,” Ambler said in his tribute. “It was foremost in her devotion to her children, grandchildren and great-grandchildren. Her love for children gave birth to her interest in working to establish services for children with physical and mental disabilities in Western Kansas.”

Ambler went on to note some of Kistler Beach’s achievements in the physical and mental disabilities field, which included her appointment to the President’s Panel on Mental Retardation, which was established by President John F. Kennedy in the 1960s, and her appointment as the U.S. representative and president of the Inter-American Children’s Institute of the Organization of American States from 1982-88.

Ambler also said that even though Kistler Beach and her husband (Ross Beach) were given many honors in their lifetimes, they both preferred to be remembered for their labors.

R.A. Edwards, husband of Terry Edwards, spoke in place of Jane Hipp, a daughter of Kistler Beach who could not be in attendance. R.A. spoke of some of Hipp’s fondest memories of her mother.

“Another one of Jane’s wonderful things she remembers is her mom studying French (and) Spanish, in France and South America,” R.A. Edwards said. “She became fluent in both those languages, even dreaming in French and Spanish, which really caused a problem for (her husband) Ross, because he never understood what she was saying in the middle of the night.”

R.A. also shared many other personal memories from Hipp of her mother.

Terry finished the ceremony by speaking of the more personal, less public side of Kistler Beach, including how Kistler Beach would send her children a postcard every day when they were at camp so their names would be included at every mail call, and spoke of old adage of Kistler Beach’s.

“One day I asked mother (after a funeral service of one of her friends), … ‘Mother, why are you never sad at funerals?'” Terry said. “I was maybe 20 at the time, maybe still in high school … and I was just totally broken up about this (funeral) – it was one of mother’s friends, – and she said, ‘There are only two times to be sad at funerals: one, if a person has not lived a worthwhile life … the second is if it is someone who hasn’t had the chance to live their life yet, a child or a young person.'”

A Celebration of Life reception took place at the Marianna Kistler Beach Museum of Art following the memorial service. 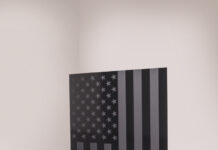