Home Community Record-setting hiker stops by Pathfinder, encourages others to find their own adventure

Jennifer Pharr Davis – the fastest person to ever hike the Appalachian Trail and 2012 National Geographic Adventurer of the Year – spoke at The Pathfinder last Friday, rounding out the last leg of her book tour.

Davis was at the outdoor and bicycle specialty store, located at 304 Poyntz Ave., promoting her new book, “Called Again: A Story of Love and Commitment.” Davis hiked the 2,181-mile long Appalachian Trail a total of three times – the most recent being when she set the record. She finished the trail in 46 days and averaged a total of 47 miles a day; she became the first woman to ever set a record on the Appalachian Trail with that time.

Davis made it a point throughout her talk not to focus on her awards and records that she set on her hikes; she focused on her journey as a person and how the trail has changed her. She also pointed out that she could not have accomplished her goal without the help of her husband and the rest of her support group who assisted her through hardships like hypothermia, shin splints and the desire to quit.

When Davis first decided to hike the trail, she said she was a 21-year-old college graduate who didn’t know the outdoors or know herself. She took her brother’s Boy Scout gear and set off on her mission to find herself, taking over five months to complete.

Now an experienced hiker, Davis has hiked over 12,000 miles in six different continents and is currently attempting to hike in all 50 states. She owns her own hiking company with her husband, Brew, and is dedicated to helping people learn how to hike.

She also is hiking the Continental Divide Trail in her spare time.

“I have never hiked a day in my life, but her story is inspiration,” Addie Howley, freshman in elementary education, said. “She had me captivated the whole time she was speaking; she’s an inspiration.”

To accompany her speech, Davis showed a slideshow of pictures from her adventures including: Africa, Australia, South America, California, Oregon, Washington and Europe. The pictures were a collection of nature shots of both wildlife and scenery.

Davis said she attributes the Appalachian Trail to helping her discover traits like empowerment and humility. Nature helped her find herself, and she is dedicating her life to sharing her story to others to inspire them to go outside through her books “Becoming Odyssa” and “Called Again.” Her husband has also written a book chronicling their journey through his perspective called “46 days.”

“The challenge is trying to find a speaker that will draw people in like Jennifer does,” said Heather Lansdowne, operations manager of The Pathfinder, about the company’s mission to host more speakers. “It’s hard to find someone of high caliber.”

Davis encouraged audience members to go find adventures of their own.

“Go outside,” Davis said. “It brings to life parts of you.” 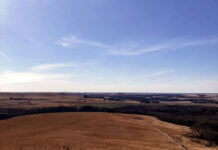 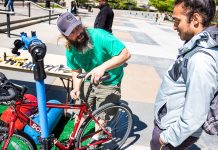