With an upcoming four-game stretch in six days, K-State head coach Bruce Weber and his team will take a vote of confidence in any way, shape or form.

After trailing by 11 points early, the Wildcats survived their first test of the season to beat the University of Missouri Kansas City 83-73.

K-State (2-0) will now head to Long Beach State on Friday. The “island portion” of the Maui Invitational begins on Monday with an afternoon tip against Purdue.

The upset-minded Kangaroos (1-1) had a second-straight upset on their minds after taking down Missouri on its home floor, however, the Wildcats came through when they needed it most.

With 5 minutes remaining in the first half, three straight turnovers in under a minute was the beginning of the end for the Kangaroos.

The Wildcats leaned on the back of Thomas Gipson, who is their lone contributing senior due to injuries. After the first half, the power forward began to do his damage down low, forcing the Kangaroos into foul trouble through its frontcourt. It forced head coach Kareem Richardson’s squad to play small, which played straight into K-State’s hands.

Gipson finished the night with 21 points and nine rebounds.

“(Gipson) was rock solid for us, he’s been rock solid the whole time,” Weber said. “It’s great, he’s playing like a senior.”

Playing like a senior puts leadership squarely on the shoulders of Gipson and to sophomore guard Marcus Foster, Gipson hasn’t let the team down.

“It’s good to have a guy that we can throw it into and get easy buckets,” Foster said. “(Gipson) has been working hard, I don’t remember the last time that he has had a horrible practice. When your leader doesn’t have bad practices, it shows when he goes out there and plays – he has good games.”

While the Kangaroos were focusing on the strong play of Gipson, the Wildcats’ guards began attacking UMKC’s guards. Foster led the charge with 16 points, including four 3-pointers.

Other Wildcats got into a rhythm against the Kangaroos smaller lineup, constantly attacking from deep. They finished the night going 8 of 13 from 3-point range.

“It’s kind of hard to cover all of us, you’ll see us kick out and swing, swing, swing,” Foster said. “We always talk about not letting guys be able to guard two of (us), and if we space it out we can get it to the open shooter.”

The solid offensive play by guards also came back to help the big men down low. With all of the ball movement that has became a staple of the backcourt, it led to the Wildcats’ forwards having open opportunities down low.

“I definitely feel that we can shoot the ball well,” Foster said. “We definitely have a team of shooters and that’s why it opens up for (Gipson), (Stephen) Hurt, Brandon (Bolden), because guys are flying at us so we can get it inside to them.”

The Kangaroos initial surge caught the Wildcats off guard, storming out to a 23-13 lead in the first 10 minutes. K-State didn’t do anything but help their cause, with seven of the team’s 17 turnovers in the opening stretch.

“I told them in halftime that I didn’t want to lose, I told them that ‘if you think that it’s bad now, if we end up losing that’s going to look bad on us, we don’t want to be like that,'” Gipson said. ” I put the team on my shoulders, I just wanted to come out to play hard in the second half and make a statement, and everyone followed through.”

Although it was closer than desired, Weber hopes his team can capitalize and learn from their early season tests.

“We need experience, we got experience in taking care of the ball down the stretch (and) not fouling,” Weber said. “Coming back from adversity, we talked as a staff, it was going to be one of the keys to our team: how we dealt with adversity.”

The Wildcats continue with the Maui Invitational after making a quick stop in Long Beach, California on Friday to take on Long Beach State (1-1, 1-0) in one of the first true nonconference games in the last few seasons. After that stop, the Wildcats travel to Maui, Hawaii to finish the invitational. 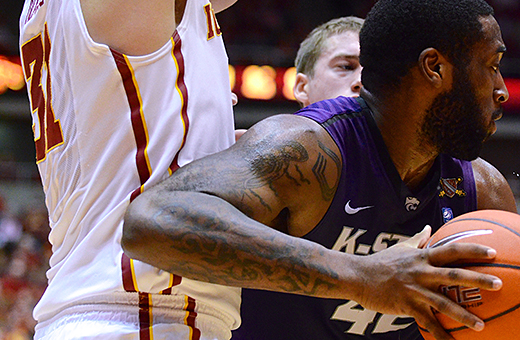 Matching Up With Texas