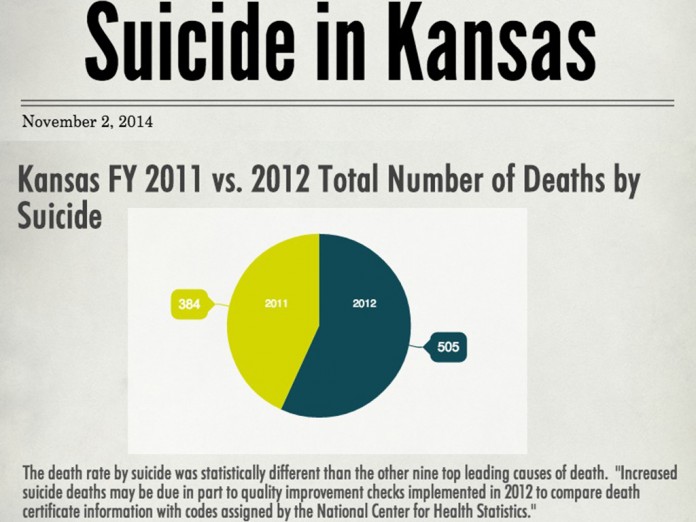 Suicide claims more lives than cancer and heart disease among those aged 1-24; it is one of the top-10 leading causes of death in the U.S. With the recent death of Robin Williams by suicide, many people are starting to ask questions. He had everything, so why did he do it?

Questions like those shine a light on the great misunderstanding of what depression is, who suffers from it and what treatment is appropriate.

“(Robin Williams) got me started on thinking how can we as a society start to fix the stigma that makes it easier for people to accept that they need treatment,” said Tyler Goevert, senior in psychology and a caseworker at Pawnee Mental Health Services who has also suffered from different mental illnesses – including depression.

In order to change this stigma, there are many misconceptions regarding suicide and depression that need addressed first. Dr. Chaz Mailey, a licensed psychologist at K-State Counseling Services, works with students who struggle with anxiety, substance use and depression.

“With suicide, there’s sort of this idea that this person is weak and that they can’t handle what’s going on,” Mailey said. “There’s also kind of this view sometimes that suicide is a gesture to try and get attention from someone.”

Mailey said another misconception about depression is the idea that those suffering from it should “just get better.” That impression can further contribute to someone’s depression, because often times the idea of getting better is a helpless and hopeless one. According to Mailey there are ways to encourage others to seek help without scaring them off from the idea.

“I think if you try and make people more aware of it and hopefully offer some resources that people can use, perhaps that can have an impact and make a difference or make a change,” Mailey said. “But I think that people have to be really committed about getting that message out there.”

Depression is triggered by a number of different factors. Mailey listed some that included life events like the loss of a relationship, the loss of a loved one, change of jobs and being harmed by another person. People may also struggle with depression because of a chemical imbalance due to family history or genetics.

Alcohol and drug abuse, certain medical conditions, sleeping problems and certain medicines can also cause depression. According to Mailey, the most common reason students suffering from depression utilize his counseling services is because they have been impacted by a major life event.

“They want someone to come and speak to about the things that are happening with them in ways that they can maybe learn how to manage some of the depressive symptoms that they’re are having,” Mailey said.

Though Goevert’s depression was brought on by a number of different things, different mental illnesses were also contributing factors. Goevert was first diagnosed with Attention Deficit Hyperactivity Disorder when he was in middle school, and in his senior year of high school he began to struggle with anxiety.

“I thought that was just a thing that happened to everybody,” Goevert said.

When he started college, Goevert continued to deal with his anxiety internally. However, it soon developed into depression during the spring semester of his freshman year and Goevert handled his anxiety the best way he knew how.

“That was just me going out partying a lot,” Goevert said. “Trying to figure out how to make myself feel better by putting myself into a lot of social situations.”

Goevert said he felt like he needed to be the same person he’d always been, which was the most difficult part. When he lost a very close friend to cancer in March of his freshman year, he felt the ordeal jumpstarted everything.

“It was a lot of worrying that my friends are just putting up with me,” Goevert said. “When I went out and did stuff with my friends, I felt like they didn’t really want me around – which they tried to tell me that wasn’t the case. When you’re depressed you don’t understand that, and it’s very difficult for you to realize that these people are telling you the truth and they actually do care about you.”

It was a close friend of Goevert’s that finally convinced him to seek treatment after he experienced the loss of yet another close friend in a skiing accident. Until then, he had refused to accept that he was depressed and chalked it up to the difficulty of losing two close friends.

“That’s the biggest thing with depression; that’s why it’s such a difficult disorder,” Goevert said. “Nobody wants to admit that they’re depressed due to the stigma attached to it and the way people view people with depression.”

There is no best treatment to offer someone suffering from depression. According to Mailey, the way to handle treatment of different people depends on many different factors, including the severity of the depression.

“Typically what they find to be the most effective is a combination of medication and then psychotherapy, and there’s different ways that people do psychotherapy,” Mailey said.

However, he finds himself hesitant to suggest medication.

“One of the reasons I’m reluctant is (that) there are side effects that come with medication, but I think sometimes when someone’s dealing with a very severe depression that’s probably going to be the best option in helping them to overcome or manage or deal with it,” Mailey said.

For Goevert, the best treatment he found when dealing with his depression was being with friends and cycling. He added that different things work for different people.

“I never had to take medication for depression or anything like that, but I know a lot of people who have more serious cases,” Goevert said. “That’s definitely a thing that can be helpful to them.”

Mailey said he thinks the idea of “wrap-around service” can be very beneficial to those suffering from depression. If all care is in one location, there is more communication between physicians, psychiatrists, psychologists and social workers. This singularity can be valuable.

Mailey encouraged those who think they, or someone they know, might be suffering from depression to speak up.

Robin Williams’ death reminded Goevert of himself when he was suffering from depression.

“It’s just a reminder to keep yourself in check and don’t be afraid to ask for help with something like this, because there are organizations and people who do a very good job of helping with (depression),” Goevert said.

Goevert said he feels open with sharing his experiences with others and has been told by many younger people, especially in his fraternity, that they look up to him.

“Basically my goal now is to kind of do what I can to help reduce the stigma,” Goevert said.

Daniel Neely contributed to this report.