Amanda Howell, sophomore in animal sciences and industry, said that like most other students, she learns better with hands-on experiences.

“Having the meat lab accessible to students is a huge learning tool,” Howell said, “Being able to see the carcasses or cuts in person really allows me (and I’m sure other students) to understand the material discussed in class.”

Howell said she is in the ASI 370 class which covers all aspects of meat evaluation and is preparation for students wanting to judge on the K-State Meats Judging Team.

“The most interesting thing I have learned is that there is a market for everything,” Howell said. “Something I find absolutely repulsive can be a high commodity somewhere else.”

Specifications involve looking at a cut of meat and verifying that it has been cut properly, that there is nothing missing or extra on that cut.

“The judging programs at Kansas State University are very lucky to have the support of the amazing faculty within the College of Agriculture,” said Garrett McCoy, a graduate student in meat science who was on the 2007 K-State Meats Judging Team.

Howell said her goal is to participate on the team in 2015.

“I believe that participating on the team will help me gain and refine my knowledge about the meat production industry, along with helping me further develop interpersonal and written communication skills,” Howell said.

Houser said 2014 was the fifth consecutive year that the K-State meat judging team has finished in the top three. The team was coached by Aaron Tapian, MaryAnn Matney and Houser.

McCoy said he is working on a research project to determine the shelf life of bison jerky.

“Graduate students are involved in numerous research projects that include, but are not limited to meat processing, shelf life studies and muscle biology,” McCoy said. “In addition to research, meat science graduate students are teaching assistants for numerous classes with laboratory activities in the meat lab.”

Houser said the meats lab collaborates with other entities on and off campus for research purposes. One of the companies they work with is the Armour-Eckrich Meats Plant in Junction City to do small scale tests that can better be performed at K-State then in their large-scale plant. Because diet has so much to do with how meat and fat compose a carcass, a lot of research is being done in conjunction with ruminant and swine nutrition.

John Wolf, K-State meat lab manager, has been working there for 25 years and really enjoys working with students that are enthusiastic about meat science, he said.

“They are not all meat or animal science students,” Wolf said. “I have students working here that are even majoring in engineering and education.”

Wolf said there are 12 meat science graduate students currently. The student workers get to be involved in all aspects of meat processing from slaughter to processing and cut and wrap of meat.

“They pay for one education and they get this one for free,” Wolf said.

Wolf said that they have a meat sale every Friday in Weber 103 where they offer different cuts of beef, pork and lamb. Some other specialty products are summer sausage, cooked sausage, and turkeys. Products are sold at the Dairy Bar in Call Hall as well.

McCoy said there is also a Meat Science Association at K-State.

“The association is a collaborative group of undergraduate/graduate students open to any students with an interest in meat science,” McCoy said. “The organization raises funds to cover travel and registration fees to scientific conferences such as American Meat Science Association Reciprocal Meat Conference and Student Leadership Conference.” 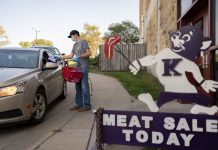