Home Culture Feature No-Shave November: Let it grow for a cause

For the guys out there, November is the most wonderful time of the year. It’s the month where it becomes socially acceptable for men to grow out their facial hair and ultimately not shave for 30 days. It’s all about No-Shave November.

“It’s an excuse not to shave,” Steven Janes, sophomore in construction science and management, said. “It’s just a time when it’s acceptable to be lazy.”

Janes first started participating in No-Shave November in early high school with a few friends. Their first experience was not so possible.

“It was awful, I was a freshman in high school with a neck beard and a mustache,” Matt Myers, sophomore in business administration, said. “It was just really nasty.”

Many view No-Shave November simply as something guys get together and do. Few know it as the non-profit organization it was originally started as. According to their website, the No Shave November is devoted to growing cancer awareness and supportive funds which go towards preventing the disease, saving lives, funding research, educating and aiding those fighting the battle.

Originally started as a way for any person, regardless of age, gender or income level to help fight cancer by raising money, No-Shave November encouraged men to donate the money they would usually use on shaving supplies to the American Cancer Society which uses funds to aid cancer research, help those fighting cancer and save lives.

The Movember Foundation, another charity that uses the month of November to help others. According to their website, Movember’s vision is, “to have an everlasting impact on the face of men’s health.”

Started by two friends in Australia raising money for men’s health, the foundation grown into a worldwide movement. Since 2003, the organization has raised over $559 million for 770 men’s health projects including prostrate and testicular cancer. In 2013, the United States Movember campaign raised $22.3 million, 83 percent of which was donated to causes.

Janes, who didn’t know about the charities behind the campaigns said he was surprised to learn about the reason behind the madness.

“I think it’s really cool, I wish more people knew about it,” Clayton Buckner, junior in philosophy, said. “Since it’s an awareness thing, It needs to be more known.”

All three of the guys said they would consider donating this year, after learning more about the different charities and causes.

So fellas go out there and make a difference with your facial hair, ladies, enjoy circa 2008 bearded Brad Pitt look-a-likes all this month on campus. November is a month of celebrating hair by donating and creating awareness for several charites.

If you participated in No-Shave November, you can donate to the American Cancer Society’s cause by going to donate.cancer.org/index. You also can donate to the Movember Foundation by visiting: us.movember.com/donate. 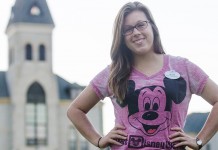